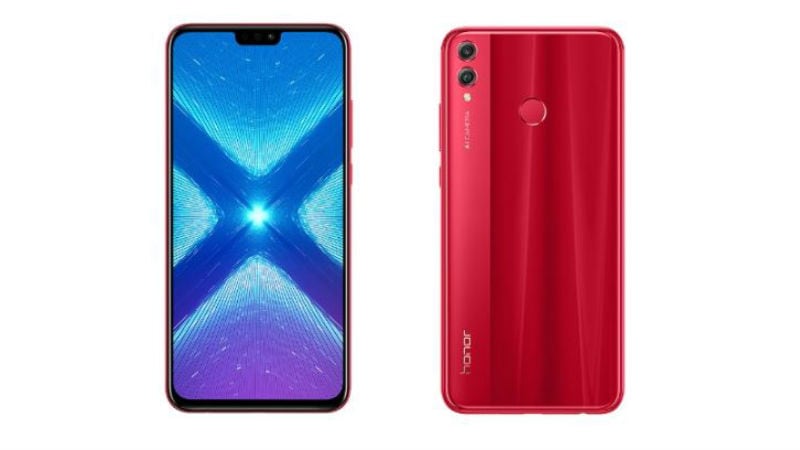 Honor 8X now comes in a Red variant in India

Honor 8X Red variant has been launched in India. After becoming available for pre-orders on November 23, the Huawei sub-brand has finally unveiled the new colour model in the country. Notably, the Honor 8X was previously available in two colour variants - Black and Blue - in India. During the smartphone's launch in October, Honor had announced all the three colour options, but the Red variant was not rolled out in India. Notably, the new Red colour model of the Honor 8X will be available for purchase via Amazon India site starting November 28 (Wednesday).

The Honor 8X, which was first launched in China in September, had made its way to India last month. Some of the key features of the smartphone include a dual camera setup, premium glass-finish back, multiple RAM + storage options, GPU Turbo Technology, and a display notch. As mentioned, during the recently concluded Honor Black Friday Sale, the Red colour variant of the Honor 8X was made available for pre-order. The smartphone was also available for purchase in a Re. 1 flash sale.​

The Honor 8X price in India starts at Rs. 14,999 for the 4GB RAM/ 64GB storage model. Meanwhile, the 6GB RAM/ 64GB storage variant costs Rs. 16,999, and the 6GB RAM/ 128GB storage variant is priced at Rs. 18,999. As mentioned, the handset can be purchased via Amazon India starting October November 28 onwards. Notably, it also comes in Black and Blue colour models. Notably, the Honor 8X with 6GB RAM and 128GB storage will be available in the other colour options on Wednesday.

The Honor 8X has a dual camera setup at the back with a 20-megapixel primary sensor and a 2-megapixel secondary sensor, coupled with f/1.8 aperture and PDAF. At the front, the handset features a 16-megapixel selfie camera with f/2.0 aperture and fixed focus.

Inbuilt storage options in the Honor 8X include 64GB and 128GB options, both of which are expandable via microSD card (up to 400GB). Connectivity options in the smartphone include 4G VoLTE, dual-band Wi-Fi 802.11ac (2.4GHz and 5GHz), Bluetooth v4.2 LE with aptX support, GPS/ A-GPS, GLONASS, BeiDou, a Micro-USB port, and a 3.5mm headphone jack. Sensors on board the smartphone are ambient light sensor, compass, fingerprint sensor, gravity sensor, gyroscope, and a proximity sensor.