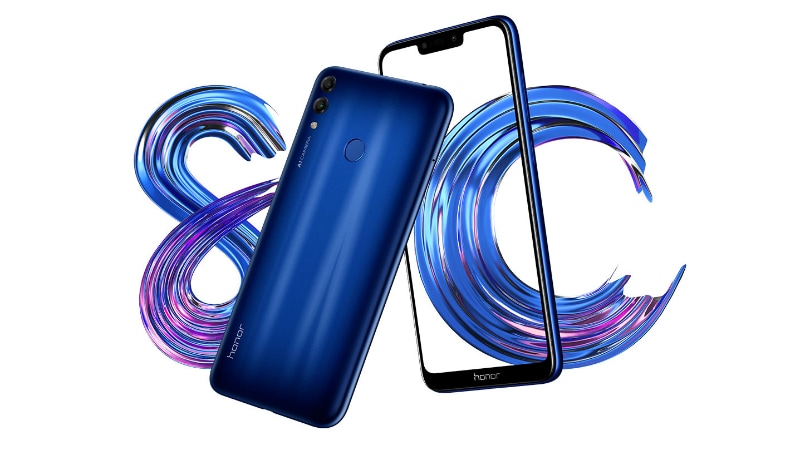 Honor 8C will be available in China in Magic Night Black, Aurora Blue, and Platinum Gold

While its formal launch is set for October 11, the Honor 8C has now been listed on Huawei's VMall. The online listing has confirmed the presence of a Snapdragon 632 SoC on the Honor 8C. This shows that the upcoming Honor model could be the first to have the new Snapdragon chip. Separately, a teaser featured on Weibo has shown that alongside the Honor 8C, Huawei brand Honor will unveil a new tablet that will be called Honor MediaPad T5 tablet. The new model could be the successor to the Honor Play Pad 2 that was launched in India as the MediaPad T3.

The Honor 8C has 32GB and 64GB onboard storage options that both are expandable via microSD card (up to 256GB). On the connectivity front, the smartphone has 4G VoLTE, Wi-Fi 802.11 b/g/n, Bluetooth v4.2, GPS/ A-GPS, and a 3.5mm headphone jack. There is a rear-facing fingerprint sensor. Besides, the smartphone packs a 4000mAh battery that is touted to deliver up to 33 hours of talk time on a 3G network.

VMall has listed the Honor 8C in three colour options, including Magic Night Black, Aurora Blue, and Platinum Gold. However, there aren't any details about the price of the smartphone.

Last month, a TENAA listing surfaced with a device carrying model number BKK-TL00 that was believed to be the Honor 8C, however, the listing mentioned a Snapdragon 636 SoC. The smartphone will be the successor to the Honor 7C that was launched back in March this year and debuted in India in May.

Coming towards the Honor MediaPad T5, the official teaser shows the availability of two speakers that are tuned by Samsung's Harman Kardon. There will also be Huawei's fifth-generation Histen 3D audio technology.

It is speculated that being the successor to the MediaPad T3 that had an 8-inch 1280x800 pixels display, the Honor MediaPad T5 could come with a 2K QHD display and could be powered by a Kirin 970 SoC.

We need to wait until the formal launch to understand what all the Honor 8C and MediaPad T5 will bring to the market.