Honor 8A Specifications, Renders Leak Ahead of January 8 Launch 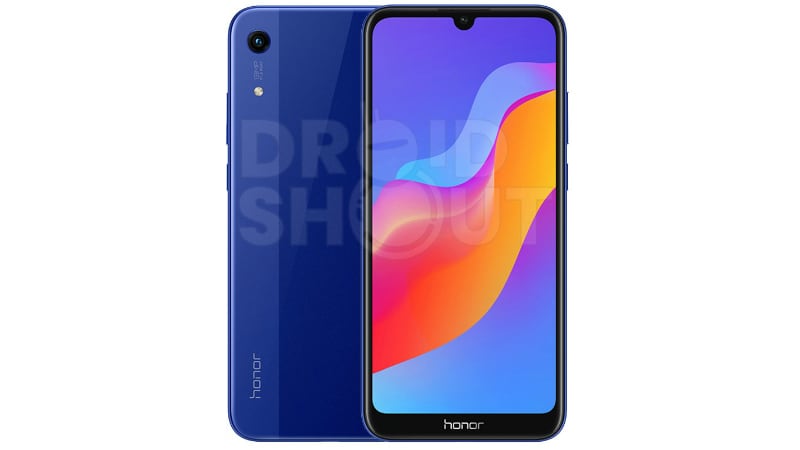 Honor 8A is leaked with a waterdrop-style display notch

Honor 8A, the upcoming smartphone model by Huawei sub-brand Honor, has now been leaked through some renders. Specifications of the Honor 8A has also surfaced alongside its Black and Blue colour options. The smartphone is set to be launched in China on January 8. It will be the successor to the Honor 7A that debuted in China back in April last year. The Chinese brand is speculated to provide an 8-megapixel selfie camera as well as an octa-core SoC. The Honor 8A is also expected to come with stereo speakers.

As per the information reported by DroidShout, the Honor 8A will run EMUI 9.0 on top of Android 9.0 Pie and have a 6.09-inch HD+ (720x1560 pixels) IPS display with 283ppi of pixel density. The smartphone is also said to have an octa-core MediaTek Helio P35 SoC, coupled with 3GB of RAM and 32GB/ 64GB storage variants.

Honor is reported to have provided dual-SIM support on the Honor 8A as well as microSD card support (up to 256GB). Besides, the smartphone is said to have a 3,020mAh battery.

The leaked renders of the Honor 8A, shared by DroidShout, show a design similar to what was spotted on TENAA last month. The front panel of the new Honor phone has a waterdrop-style display notch. This is unlike the Honor 7A that didn't have a notch design and arrived with a simple HD+ display.

Honor may provide a higher screen-to-body ratio on the Honor 8A over what was available on the Honor 7A, thanks to the waterdrop-style display notch.

Coming towards the back, there is a dual-shade panel that looks close to what was featured on the Honor 8X and Honor 8X Max in the past. The back panel of the Honor 8A isn't similar to that of the Honor 7A, though. The latter had a simple, matte finish back panel with antenna bands.

Huawei sub-brand Honor is set to launch the Honor 8A in China on January 8. The initial teaser of the smartphone suggested the presence of stereo speakers.