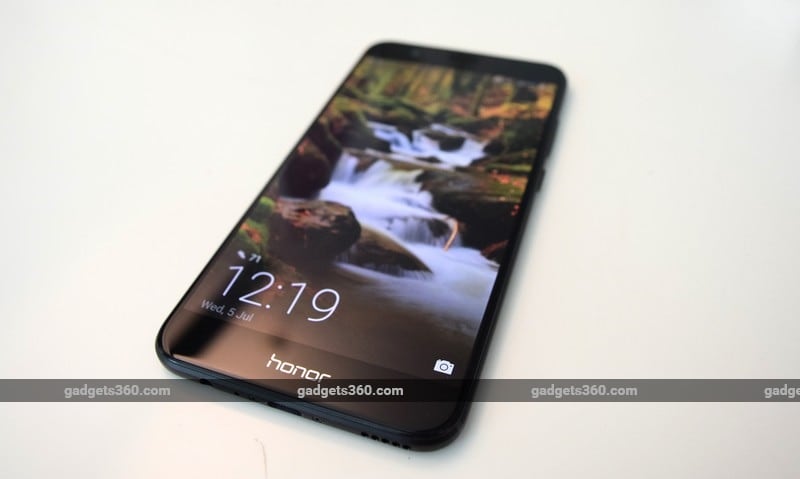 Huawei Terminal brand Honor finally launched its Honor 8 Pro (Review) smartphone in India on Thursday after unveiling the handset last month for the country. Some of the highlight features on the smartphone are its dual camera setup, a massive 4000mAh battery, and an impressive 6GB of RAM. Additionally, the retail box for the Honor 8 Pro can also be turned into a Google Cardboard viewer for VR experience as well.

The Honor 8 Pro will be made available in Navy Blue and Midnight Black colour variants in India. The phone comes with a fingerprint scanner, which is located at the back and can be used to unlock the device.

The Honor 8 Pro priced in India is Rs. 29,999, and the company has brought only the 6GB RAM/ 128GB inbuilt storage of the smartphone to the country. At the price, the smartphone goes head-to-head with the OnePlus 5 in the Indian market - specifically, the 6GB RAM/ 64GB storage priced at Rs. 32,999 - that also sports a dual rear camera setup.

The Honor 8 Pro will be made available exclusively via Amazon India, and its first sale exclusively for Amazon Prime members will start at 6pm IST on Monday, July 10 - which also happens to be the start of Amazon Prime Day. Open sales begin from 12am on July 13. As for launch offers, during the Prime Day sale, Prime subscribers will get 15 percent cashback if they use HDFC Bank credit and debit cards. During the open sale, Amazon is enticing users with its Vodafone 45GB over five months offer, as well as no-cost EMI options.

The dual-SIM Honor 8 Pro runs Android 7.0 Nougat-based EMUI 5.1 out-of-the-box. The company has touted the adaptive nature of the OS in the past, and claims that 90 percent of core operations can be completed in 3 easy steps.  and sports a 5.7-inch QHD (1440x2560 pixels) LTPS LCD display with Gorilla Glass 3 protection. The smartphone is powered by a HiSilicon Kirin 960 (four Cortex-A53 cores clocked at 1.8GHz and four Cortex-A73 cores clocked at 2.4GHz) coupled with 6GB of LPDDR4 RAM.

Starting with the optics on the smartphone, Honor 8 Pro comes with a dual rear camera setup that consists of two 12-megapixel sensors with f/2.2 aperture, laser autofocus, LED flash, and 4K video recording. As you might expect, one sensor takes the images in RGB while the other sensor takes the images in monochrome. At front, the smartphone comes with an 8-megapixel sensor coupled with an 77-degree wide-angle lens.

The Honor 8 Pro comes with 128GB of built-in storage, which is further expandable via microSD card (up to 128GB) in a hybrid dual-SIM format. The company says this 128GB variant is meant specifically for the Indian market, and that the "rest of the world will have to make do with 64GB." The connectivity options on the Honor 8 Pro smartphone include 4G VoLTE connectivity, dual-band Wi-Fi 802.11 a/b/g/n/ac, USB Type-C, Bluetooth v4.2, 3.5mm headphone jack, and NFC. As mentioned earlier, the handset features a 4000mAh battery that's rated to deliver up to 1.44 days of battery life with heavy use and 2 days with regular use. Sensors on board include accelerometer, ambient light sensor, digital compass, gyroscope, infrared sensor, and proximity sensor. It measures 157x77.5x6.97mm and weighs 184 grams.

The smartphone comes with the Galaxy on Fire 3 and Jaunt VR apps pre-installed and company says that it has partnered with Gameloft and GoPro for in-built apps as well.