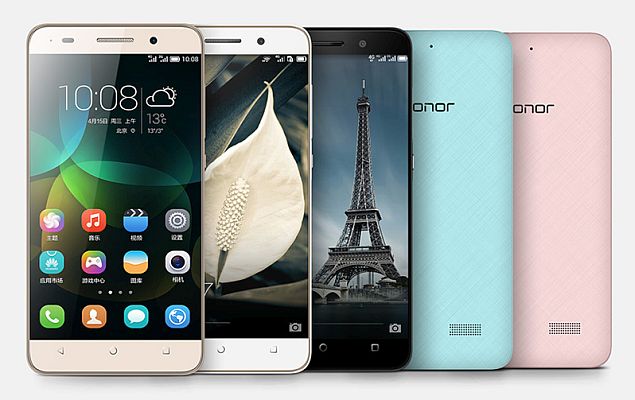 Huawei has launched a new Honor-series smartphone, the Honor 4C, in China. The smartphone will be available at CNY 799 (approximately Rs. 8,150) and will come in Black, Blue, Gold, Pink, and White colours.

The Honor 4C is now listed on Huawei's dedicated Honor-series website and confirms that it will be available via Tmall and Vmall online retailers in China. Unfortunately, the Chinese company as of now has not revealed availability details of the Honor 4C outside its home country.

For specifications, the Honor 4C features a 5-inch HD (720x1280 pixels) TFT IPS display. It is powered by an octa-core HiSilicon Kirin 620 processor coupled with 2GB of RAM. The dual-SIM Honor 4C smartphone runs Android 4.4 KitKat with EM UI 3.0 skin on top. It sports a 13-megapixel rear camera with f/2.0 aperture, LED flash, and CMOS sensor, while it also houses a 5-megapixel front camera. The handset packs 8GB of inbuilt storage that can be further expandable via microSD card (up to 32GB). The Honor 4C is backed by a 2550mAh battery.

Huawei certainly seems to promoting its Honor series in several regions globally. Huawei in March said it will spend $10 million (about Rs. 62.5 crores) this year to push sales of its Honor series smartphones in India.

In the meanwhile, Huawei's Ascend P8 Lite, a 'lite' variant of the Ascend P8 flagship smartphone, was available to pre-order in Germany.

The Huawei Ascend P8 Lite was available to pre-order via a third-party retailer at EUR 249 (approximately Rs. 17,250). Listed as Huawei P8 Lite on the e-commerce website, the smartphone runs Android 5.0 Lollipop much like the flagship.

Other specifications of the Huawei Ascend P8 Lite include a 5-inch HD (720x1280 pixels) IPS display; an octa-core processor clocked at 1.2GHz; 2GB of RAM; 16GB inbuilt storage; expandable storage support via microSD card (up to 128GB); a 13-megapixel autofocus rear camera; a 5-megapixel front camera, and a 2200mAh battery.