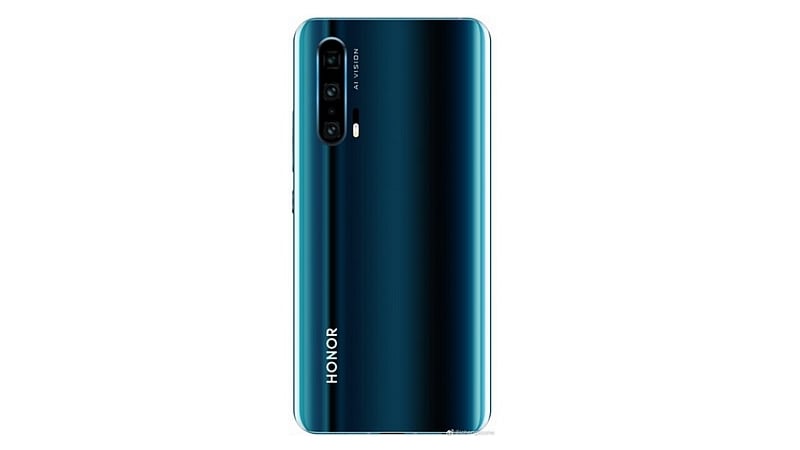 Honor 20 series is set to make its global debut on May 21, but ahead of the launch event in London, an alleged image of the Honor 20 Pro has surfaced online. The Honor 20 Pro's leaked image shows quad rear cameras and a gradient finish on the rear panel. A previous leak indicated that the Honor 20 Pro will sport a triple rear camera set-up, but the alleged Honor 20 Pro image clearly shows four sensors, with one of them appearing to be a ToF camera.

If there is any legitimacy to the leaked Honor 20 Pro image, which surfaced on Chinese microblogging platform Weibo, the phone will come equipped with four rear cameras and will sport a dark blue finish with a gradient design. The sensor at the top has a linear outline and appears to be a periscope sensor, just like the one on the Huawei P30 Pro. As per a recent leak, the main snapper on the Honor 20 Pro will reportedly be a 48-megapixel camera utilising the Sony IMX600 image sensor.

It will reportedly be accompanied by a 20-megapixel wide-angle lens and an 8-megapixel telephoto lens, which is said to have 3x optical zoom support. The fourth sensor shown in the leaked Honor 20 Pro image appears to be a ToF camera. Moreover, there also appears to be a laser autofocus module just above the LED flash.

As for the rest of the rumoured specifications, the Honor 20 Pro will be powered by the Kirin 980 SoC paired with up to 8GB of RAM and 256GB of internal storage. The phone is tipped to come equipped with a 3,650mAh battery with support for 22.5W fast charging and will also bring features such as Gaming+, Link Turbo, and GPU Turbo among others. The Honor 20 Pro might come in three storage variants and will reportedly start at CNY 2,999 (roughly Rs. 31,100) upon its launch on May 21, alongside the Honor 20 and the Honor 20 Lite.