Honor 20 series launch is expected to feature the Honor 20 as well as the Honor 20 Pro. The company has already introduced Honor 20 Lite. 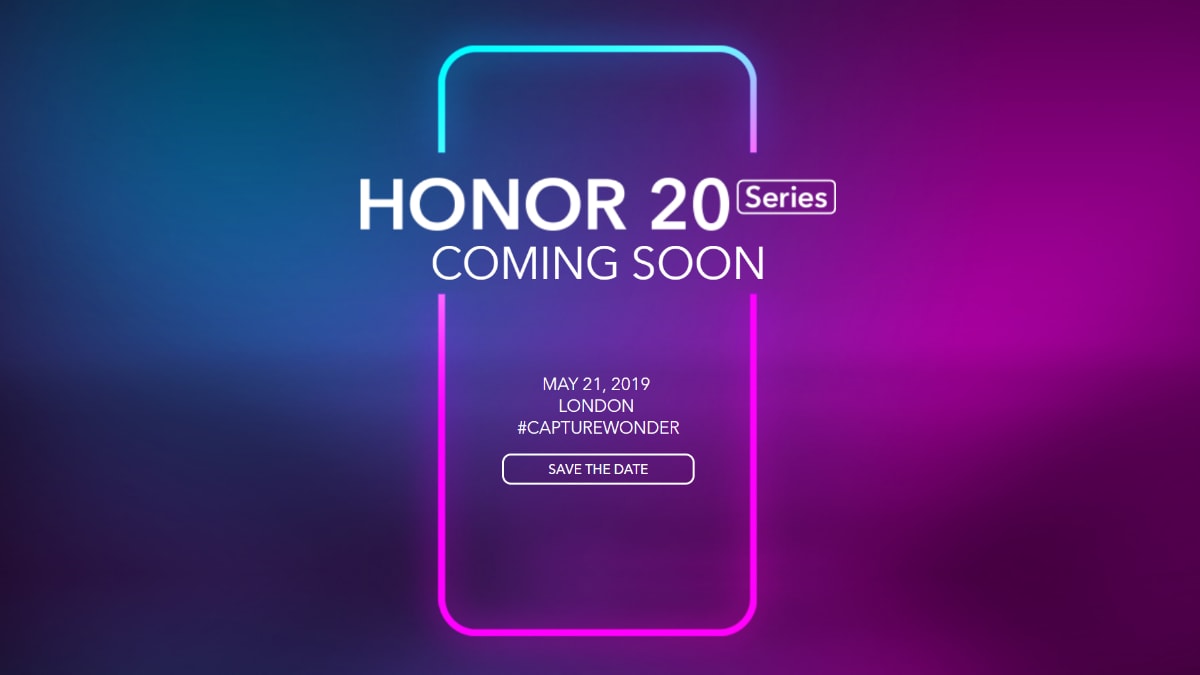 Honor 20 series is set to launch today. Huawei sub-brand Honor is hosting the Honor 20 launch in Battersea, London, at 2pm local time (6:30pm IST). Recent reports have claimed that alongside the vanilla Honor 20, the Chinese telecommunication giant will bring the Honor 20 Pro smartphone. The new phones are believed to be the successor to last year's Honor 10 models and are teased to sport four rear cameras. Last week, the brand even kicked off the pre-orders for the Honor 20 through Vmall in its home market.

Honor will be live streaming the Honor 20 launch through its YouTube channel. The event will begin at 2pm local time in London (6:30pm IST). It will take place at Battersea Evolution in Battersea, London. We have embedded the launch live stream below for you to check out the event right here.

Days ahead of the launch event, the pre-order window for the Honor 20 series went open in China -- with a dedicated page available on Vmall. The brand, however, hasn't announced any price details of the new phones.

The new lineup is expected to include the Honor 20 Pro in addition to the regular Honor 20 model. But it is worth noting here that the brand hasn't confirmed the existence of the new smartphones. It instead teased the arrival of the Honor 20 series, which is enough to presume that there will be at least more than one phone in the new lineup.

It is worth mentioning here that earlier this month, the Honor 20 Lite debuted in Malaysia as the first model in the Honor 20 family. The smartphone sports a triple rear camera and comes with 128GB of onboard storage.

The Honor 20 series is already set to launch in India on June 11. The range could include the regular Honor 20 model alongside the Honor 20 Lite and Honor 20 Pro. Moreover, Honor has also confirmed its partnership with Flipkart for launching the new smartphone models in the country.

Some early leaked purported renders of the Honor 20 series have also showcased the quad rear cameras. Also, the phones are speculated to have ultra-thin bezels alongside a punch-hole display panel. Some reports, however, mentioned that the phones would have a pop-up selfie camera module.

Among other specifications, the Honor 20 could come with a 3,650mAh battery that might support 22.5W fast charging. The Honor 20 Pro, on the other front, may have a bigger battery pack than what would come on the Honor 20. The phones are also believed to have dual-band Wi-Fi 802.11ac, Bluetooth v5.0, USB Type-C port, and Virtual 9.1 Surround Sound.