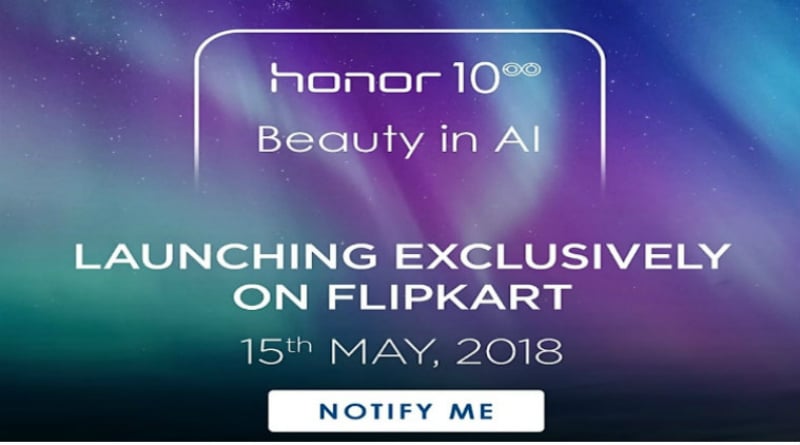 Honor 10 India launch date has been revealed by the company's online sales partner Flipkart. This comes a week after the Huawei's sub-brand announced that its flagship phone will arrive in the country sometime in the end of May. Now, Flipkart has confirmed that the smartphone will be made available exclusively on its website and app from May 15. The Honor 10 price in India and launch offers are expected to be announced soon.

Flipkart has now activated the 'Notify Me' page for all those interested in the Honor 10, and has also revealed that the smartphone will launch in India on May 15. Honor is also hosting an event in London on May 15 where it is expected to launch the Honor 10 in other international markets. Additionally, Gadgets 360 has learnt that the Honor 10 price in India will be around the Rs. 35,000 to take on the upcoming OnePlus 6.

In the camera department, the Honor 10 gets a dual camera setup on the back with a 16-megapixel + 24-megapixel camera combo, including features such as a dual LED flash and f/1.8 aperture. It comes with "AI Camera" branding on the back. The front camera has a 24-megapixel sensor for selfies and video calling. There is 64GB/ 128GB of inbuilt eMMC 5.1 storage. Under the hood is a 3400mAh battery with quick charging support. Honor claims the bundled charger can charge the smartphone up to 50 percent in 25 minutes.

Connectivity options on the Honor 10 include 4G LTE, Wi-Fi, and Bluetooth. Dimensions of the handset are 149.6x71.2x7.7mm and weight is 153 grams. It has support for Huawei Pay in China.

Facebook's Crackdown on Fake Profiles Doesn't Fully Solve the Problem
Warren Buffett Is Apple's Third-Largest Shareholder, and He Wants to Own More