Google's Android One Reaches Myanmar With Cherry Mobile One 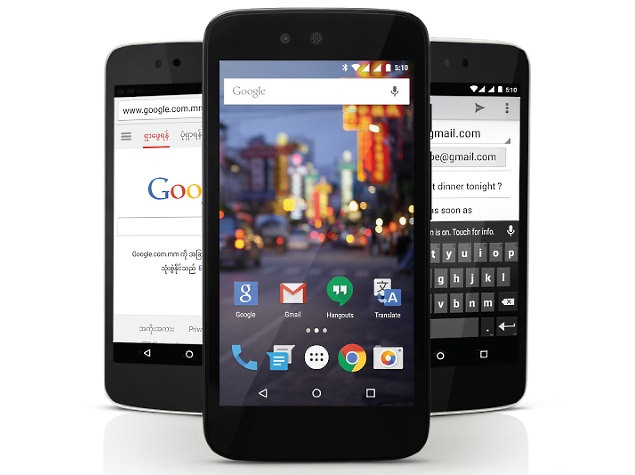 Google's Android One initiative on Tuesday was launched in Myanmar. With the launch in new Asian country, Myanmar has become the eighth country after India, Bangladesh, Nepal, Sri Lanka, Indonesia, Philippines, Sri Lanka, and Turkey (first country outside Asia) where Google's low-cost Android One smartphones will be sold.

The new Android One phone - the Cherry Mobile One - will be available starting Friday via retail stores across Myanmar and will come at MMK 1,09,000 (approximately Rs. 6,250).

Google has confirmed that the Cherry Mobile One will run Android 5.1.1 Lollipop out-of-the-box. As for specifications, the Cherry Mobile One will come with identical specifications as the Karbonn Sparkle V, Micromax Canvas A1, and Spice Dream Uno. It will feature a 4.5-inch FWVGA (480x854 pixels) display; 1.3GHz quad-core processor; 1GB of RAM; 8GB of built-in storage; expandable storage via microSD card (up to 32GB); Dual SIM (Micro SIMs) support; 5-megapixel rear camera; 2-megapixel front camera, and 1700mAh battery.

In a blog post announcing the expansion of Android One to Myanmar, Caesar Sengupta, VP, Product Management at Google, said, "We hope the arrival of Android One helps put great smartphones into the hands of more people across Myanmar, and we look forward to working with our partners to launch more devices in more countries over the coming months."

Earlier this month, Google started rolling out Android 5.1.1 Lollipop update to its Android One smartphones in India.

The Android One smartphones that received the update include the Micromax Canvas A1, Spice Dream Uno Mi-498, and Karbonn Sparkle V. The Android 5.1.1 Lollipop update brought performance improvements and overall OS stability for the three Android One devices.

Last month the Android One initiative reached Turkey in the form of a new handset - General Mobile GM 4G. The smartphone was the first Android One device to support 4G connectivity.

BlackBerry to Build Android Phone Only if It Can 'Find a Way to Secure' It
Borderlands, Mass Effect 2, Civilization V, and More Apps on Discount or Free Right Now