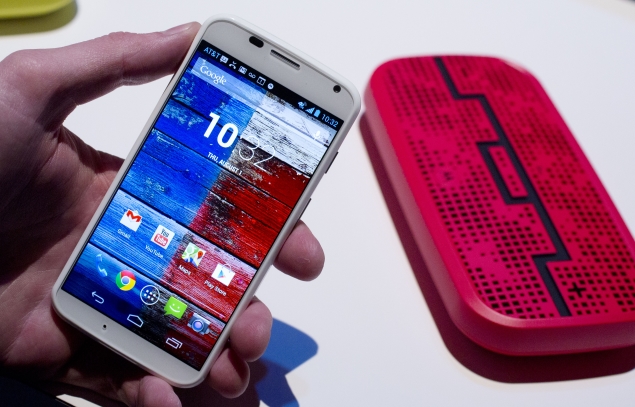 Motorola on Thursday unveiled a new smartphone that consumers can personalize with a choice of colors and materials, hoping to stand out in a crowded market and justify the $12.5 billion that Google Inc paid for the ailing handset maker.

The highly anticipated "Moto X" marks the cellphone maker's first flagship device since Google bought the company in 2012, and is its latest attempt to break into a smartphone market dominated by Apple Inc and Samsung Electronics.

The phone's customization options are a novel touch which may appeal to fashionistas, analysts said. But some analysts questioned whether the Moto X offers the kind of technological breakthroughs that will vault Motorola back into the top rungs of the mobile rankings.

"We would have expected magic from somebody like Google, and this is not magic," Roger Entner, an analyst with Recon Analytics, said.

"Motorola could have done this without Google equally well. Or for that matter, another hardware manufacturer not owned by Google could have made this phone," he said, citing the phone's average hardware specifications.

The Moto X will go on sale in the United States at the end of August or the beginning of September for a suggested retail price of $199.99 to customers who sign a two-year contract at five of the biggest U.S. mobile network operators.

Google faces a steep climb in its effort to revive Motorola, which once claimed the No. 2 spot in the global phone market but according to research firm Strategy Analytics now commands a mere 2 percent market share. Shut out of the Apple-Samsung battle, Motorola competes with other smaller players such as HTC, Nokia and BlackBerry.

Motorola is betting that it can win over consumers by offering a huge palette of colors to personalize their phones, as well as unusual phone materials such as wood.

"They're not playing the 'mine is bigger than yours game,'" Avi Greengart, an analyst with Current Analysis, said. "Their approach is that this is what consumers actually need.

"I have no doubt there are people who want to customize their phones. The question is how many of them," Greengart added.

AT&T Inc, the No. 2 U.S. mobile service provider, will have exclusive rights to let its customers customize the phone from a selection of 18 colors for the back, two for the front and seven accent colors for an undisclosed time period.

While AT&T will allow customers to customize their phones, rivals Verizon Wireless , Sprint Corp, T-Mobile US and U.S. Cellular will only be able to offer black-and-white versions of the device.

In order to promise delivery of customized phones within four days, Motorola had contract manufacturing partner Flextronics International Ltd build a factory in the United States.

Another phone launch
The Moto X launch comes as speculation grows that Apple will unveil a less expensive version of its iPhone later this year. There are also rumors that Amazon.com is developing a low-cost smartphone, to follow up on the success the e-commerce company has had with its Kindle tablets.

Colin Gillis, an analyst with BGC Partners, said the Moto X's is too expensive given the market's shift to lower-priced phones. Motorola is "chasing after the high end right when the high end is dead," he said.

The phone's price and its lackluster features will hamper Motorola's efforts to return to profitability, said Gillis.

"Motorola has been in the money-losing club and clearly they want to stay there," he said.

Since it bought Motorola, Google has promised that it would rationalize the company's phone range, which included as many as 45 phones in 2011. Along with the Moto X and three Motorola Droid phones, Motorola will likely have just one more phone launch this year, said Rick Osterloh, Motorola's vice president.

A Motorola spokesman told Reuters that the next phone would be less expensive than the Moto X.

Analysts also noted that the Moto X does not include the newest version of Android, the mobile operating system software that Google gives away for free and which is featured on three out of every four smartphones sold worldwide.

Google must walk a fine line in its ownership of Motorola, to make sure that other phone vendors that use its Android software - including Samsung - do not feel that Motorola receives preferential treatment.

Motorola, which Google runs as a separate company, does not get early access to new versions of Android, a spokesman said, noting that the newer 4.3 version of Android was only made available last week.

Google primarily makes money off of Android from online advertising when consumers access its services on Android-powered devices.

Rick Osterloh, Motorola's vice president for product management, said consumers have shown that they are interested in putting their personal stamp on a phone, seen in the popularity of phone cases featuring various colors and sparkly surfaces.

Motorola is still working out which wood to use, he said. Aside from cosmetic concerns, the decision will have technology ramifications because different woods "respond differently" to radio signals.

In addition to industrial design changes such as a curved back and the choice of colors, the phone's key features found in its camera and a voice-activated user interface are the same as what Motorola introduced in its line-up of new Droid devices last week.

Motorola said that Moto X would become available in Canada and Latin America as well as the United States around the same time.

Motorola said it has yet to establish a price for customers who want to pay the full retail price without signing a contract.

USB 3.1 specification announced, would offer speeds of up to 10Gbps
Icahn sues Dell in latest attempt to foil buyout