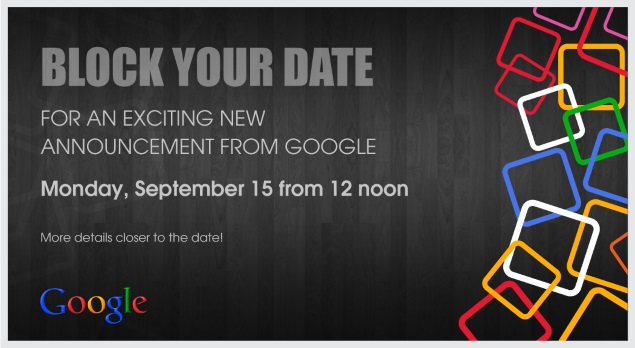 Google has sent invitations for an event in India on September 15. While the invite itself says "More details closer to the date!", it is expected that the much-awaited Android One smartphones will make their debut at the event.

Android One was announced back in June at Google I/O with India's Karbonn, Micromax, and Spice the confirmed launch partners, though more Indian companies have reportedly joined the list since then.

Android One smartphones with their affordable price tag and near-stock Android software are Google's attempts to regain control of the customer experience in the entry-level segment. While the success of the likes of Moto E (Review | Pictures) has made a little bit of a difference, the experience in the sub-Rs. 10,000 smartphone segment has been sub-par for most Android users.

This can largely be attributed to low-end hardware and an OS that often comes pre-installed with all kinds of bloatware due to the marketing deals that many manufacturers sign in a bid to offset some of the costs.

Sundar Pichai, Senior Vice President, Android, Chrome and Apps at Google told NDTV Gadgets that the Mountain View-based company will not subsidise Android One hardware. Instead, Pichai hoped that the by sharing resources between Google and the OEMs, the companies would be able to keep the total cost of manufacturing in check.

Given the importance Google is placing on the Android One project, it would be no surprise to see Pichai himself make an appearance at the September 15 event.