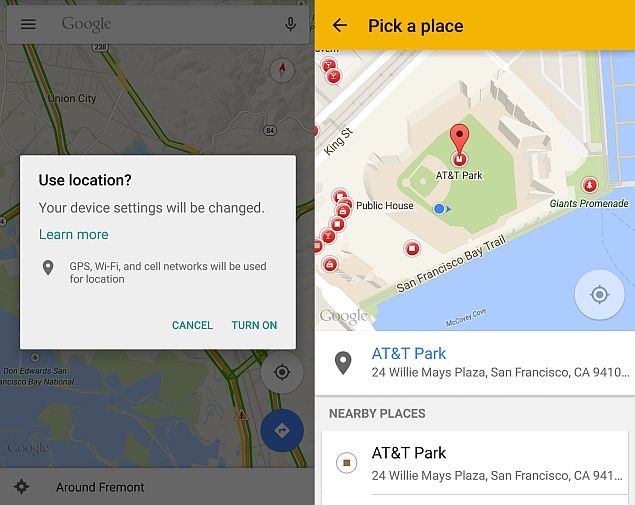 One of the highlights of Play Services 7.0 is the new Places API, giving developers access to point-of-interest information. Among other features, the API includes a built-in picker to easily access details of a particular place like name, address, phone number, website and others. Using the API, developers can pick nearby locations and format it in a custom UI.

With Google Play Services 7.0, Google has broken up its Google Fit API in to several different APIs, which it claims will result in less memory usage than before. The Fit API has now been split into Sensors API, Recording API, History API, Sessions API, BLE (Bluetooth Low Energy) API and Config API.

The Location API will now let supported apps ask users if they want to make some changes in their location settings. As for advertising, Google Play Services 7.0 "enables any Google Mobile Ads SDK implementation to automatically get Google Analytics integration", providing developers access information about their users, devices, geography, OS and more.

The firm at the ongoing Game Developers Conference 2015 also introduced a new 'Nearby Connections API' under the Google Play Service 7.0 to let smartphone or tablets work as game controllers for apps running on Android TV-based television sets. Also, Google improved its App Indexing, which lets Google Search results to link directly into the developer's native app.

Meanwhile Google at the MWC 2015 trade show announced that Waze, a popular navigation app, will now be an option for OEM partners to pre-install on their Android handsets. "The announcement of Waze as a Google Mobile Service is the next step to become a platform that connects communities of citizens with the aim of promoting safer roads. OEMs and carriers now have the ability to help local markets to become connected cities overnight," said Julie Mossler, Waze spokesperson in a prepared statement.

It is worth mentioning that Google had pulled the Waze app back in 2013 and later bought it for $966 million.

Waze in January, came in to the news for its ability to track police in real time. To some in law enforcement, this feature amounted to a stalking app for people who want to harm police.