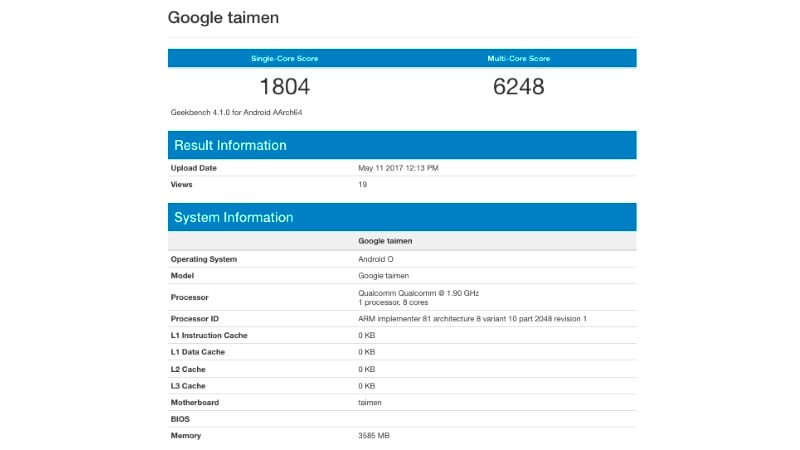 Google is expected to launch three Pixel devices this year and among these, the search giant's device codenamed "Taimen" has now been suggested to feature 4GB of RAM. As per a leaked benchmark listing of Google Taimen, the device will pack 4GB of RAM and will run Android O, which should not come as a surprise considering it is expected to be launched around October as one of the new platform lead devices.

The Google Taimen's Geekbench listing, spotted by Dutch site Telefoon Abonnement, suggests that the device will come with an octa-core Qualcomm processor clocked at 1.90GHz, notes GSMArena. While the processor's name has not been revealed in the leaked benchmark test, it is highly likely to be Snapdragon 835 SoC.

As per earlier reports, Taimen is expected to be bigger than other two Pixel devices - Walleye and Muskie - which are expected to be the direct successors to Pixel and Pixel XL smartphones from last year. Thanks to its larger size, Taimen has been speculated to be a tablet or even a large-screen Android phone, much like the Nexus 6.

The developer preview for Android O was released by Google in March and the company recently announced that Android O beta will launch soon. This announcement was made by Google just days ahead of its I/O 2017 developer conference as it announced the end of the Android Nougat beta.

Some of the new features that come along with Android O include tighter control on background limits for apps to deliver better battery life, Notification Channels, and Adaptive Icons.