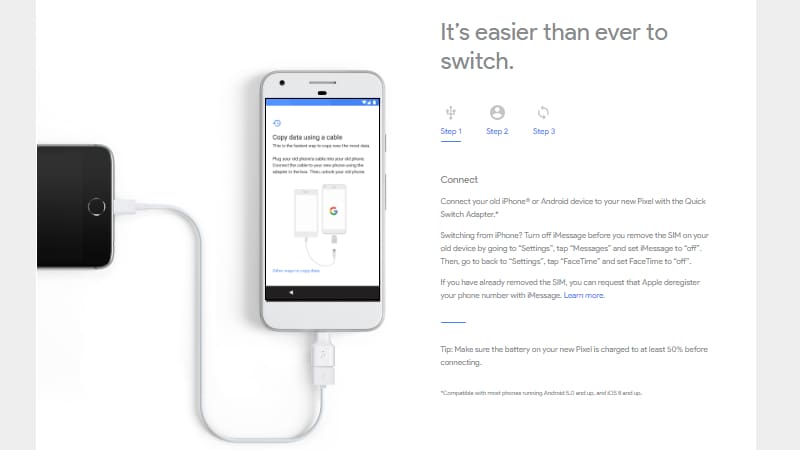 Google has launched its Pixel and Pixel XL smartphones, and prices start at Rs. 57,000. The smartphones have Google Assistant inbuilt, a rear camera with 89 DxOMark score, unlimited cloud storage for full resolution photos and videos, and Android 7.1 Nougat running out-of-the-box. Even with the steep price tag, Google is betting big on these smartphones and expects many users to make the switch. With this in mind, Google is bundling a 'Quick Switch Adapter' with all Pixel and Pixel XL smartphones for free to help users migrate from iPhones and other Android phones easily.

Switching between Android phones has always be relatively easy since most of your data is backed up on Google accounts, the big pain point is when users move to Android after using an iOS device. In order to make the switch easy for both Android and iPhone, Google has bundled the tiny Quick Switch Adapter. This adapter is bundled with the Google Pixel and Pixel XL smartphones. All you have to do is use your old phone's data cable, connect one end to your old phone, and the USB port on the other side into the adapter that's attached to your new Pixel phone. Once the two devices are connected, the Pixel smartphone will throw up instructions automatically. Google adds that the Quick Switch Adapter and the transfer process is compatible with both iPhone and iPad devices (running iOS 8 and higher), and most Android devices (running Android 5.0 and higher).

The Pixel and Pixel XL smartphones are already up for pre-order in US, Germany, Canada, UK, and Australia, and the pre-sale in India will begin on October 13.

4chan Is Facing Collapse, but Not for the Reasons You Think
This Is the News Facebook Chooses for You to Read