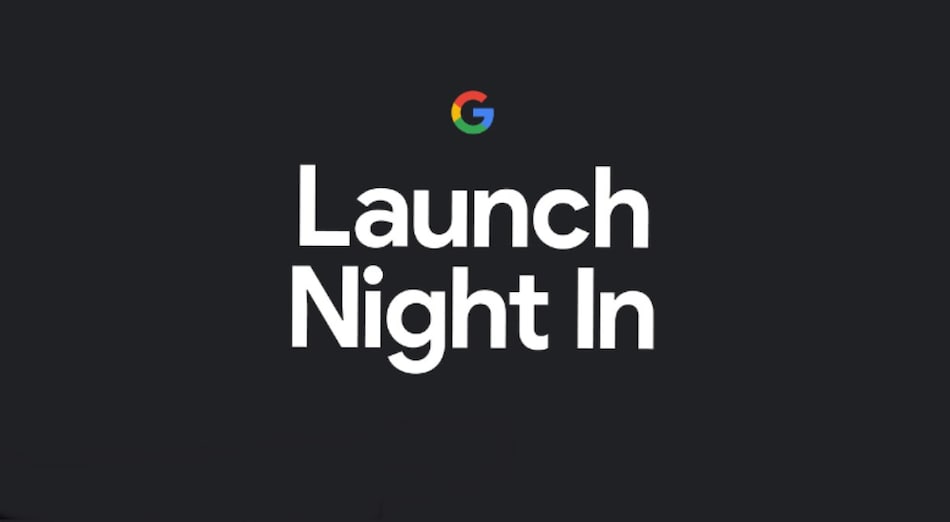 Google Pixel 5 and Google Pixel 4a 5G phones are all set to launch today. The tech giant is hosting a virtual event titled ‘Launch Night In' and a new smart speaker and Chromecast are teased to be introduced as well. Google Pixel 5 is tipped to pack a 4,000mAh battery and a dual camera setup at the back. It is expected to feature a hole-punch display with 90Hz refresh rate. The Pixel 4a 5G will likely have the same processor as the Pixel 5, but may have a slightly larger display. The upcoming Chromecast is rumoured to be called Chromecast with Google TV and it is expected to see significant improvements.

The Google event will begin at 11am PT (11.30pm IST). The company has confirmed the arrival of a ‘new Chromecast, latest smart speaker and new Pixel phones.' The livestream will be held on YouTube and users from all over the world can access it on any browser or the YouTube app. Alternatively, you can also watch it below:

The Google Pixel 5 phone is tipped to be priced at EUR 629 (roughly Rs. 54,000) for the lone 8GB RAM + 128GB storage configuration in Europe. It may be offered in two colour options – black and green.

Past leaks suggest that the Google Pixel 5 may run on Android 11 and feature a 6-inch OLED (1,080x2,340 pixels) display with 90Hz refresh rate, Gorilla Glass 6, and 19.5:9 aspect ratio. It is expected to be powered by an octa-core Qualcomm Snapdragon 765G SoC, paired with 8GB RAM. Internal storage is tipped to be at 128GB.

There is expected to be a dual rear camera setup with a 12.2-megapixel primary sensor with optical image stabilisation (OIS) and f/1.7 lens. It will be paired with a 16-megapixel wide-angle camera with a 107-degree field of view (FOV) and f/2.2 aperture. The Google Pixel 5 may feature an 8-megapixel Sony IMX355 snapper, placed inside the hole-punch cutout at the front.

The Google Pixel 5 is expected to pack a 4,080mAh battery with 18W Qi wireless charging support, as well as 5W reverse wireless charging. Other features are tipped to include a rear fingerprint scanner, Bluetooth 5.0, USB Type-C, and NFC. The phone is tipped to weigh 151 grams. A recent leak also hints at the launch of the Google Pixel 5s with support for mmWave 5G connectivity.

Coming to specifications, the Google Pixel 4a 5G is expected to run on Android 11. It may feature a 6.2-inch full-HD+ (1,080x2,340 pixels) OLED display with 413ppi of pixel density, 60Hz refresh rate, HDR support, and Corning Gorilla Glass 3 protection on top. It is tipped to be powered by the Snapdragon 765G SoC, paired with 6GB of RAM and 128GB of storage.

The Pixel 4a 5G is reported to have the same camera setup as the Pixel 5. It is tipped to pack a 3,885mAh battery with 18W fast charging support. Connectivity options may include a 3.5mm audio jack, USB Type-C, NFC, Bluetooth v5, and more. It is tipped to be slightly heavier than the Pixel 5 weighing at 168 grams.

This new streaming dongle is reported to support full-fledged apps and come with a revised Android TV interface. This dongle can be attached to a TV or display and it can be used to access various apps and services using the new remote. The remote is tipped to have dedicated Netflix and YouTube buttons, a D-Pad, navigation controls, a dedicated Google Assistant button, and volume buttons. The Chromecast with Google TV is reported to be powered by Amlogic S905X2 quad-core SoC, paired with 2GB of RAM.

Details regarding the speaker are scarce at the moment and Google would reveal all details during the event.

The Lion King 2 Official With Moonlight Director Barry Jenkins
Vivo V20 Series Confirmed to Launch in India Soon, to Be Offered via Flipkart