However, the display of Google Pixel 4 XL makes it stay usable even after getting bent. 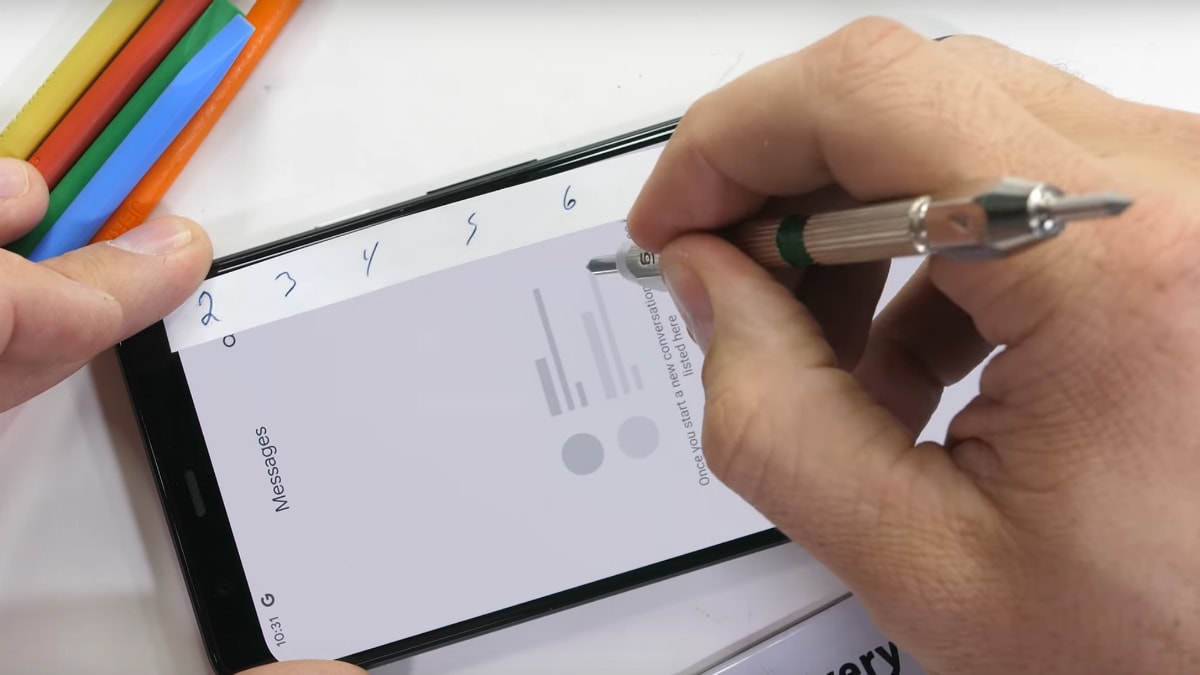 While Google accentuates all great features of the Pixel 4 XL to make it a solid choice in the high-end market segment, YouTube channel JerryRigEverything has put the latest Pixel flagship on a series of stress tests to highlight its fragile design and bendable body. The narrator in a video of over nine minutes takes the Pixel 4 XL through the traditional scratch and bend tests to examine its durability. Google has used glass protection at both the front and back of the Pixel phone that doesn't strongly resist scratches. Also, the structure of the handset is found to bend easily with some amount of pressure.

The narrator begins the stress test video on the Google Pixel 4 XL by attempting to scratch its display that is protected by a Gorilla Glass panel. The phone is found to gain scratches at hardness levels between six and seven of Mohs' scale. This is similar to many other flagships, including the iPhone 11 and OnePlus 7 Pro.

Google has offered an aluminium frame on the Pixel 4 XL that isn't anodised and is found to have a thick paint coating on top, similar to previous Pixel phones. This "hybrid coating" can be scraped off easily, the YouTuber notes in the video.

Similar to previous Pixel phones, the Pixel 4 XL carries an oddly coloured power button that is found to be made of a plastic material. The handset also has a plastic "buffer layer" between its glass screen and metal frame that could help protect the display during some drops.

At the back, the Pixel 4 XL reminds us of the iPhone 11 Pro with a square-shaped camera module. The camera setup appears to have scratch-resistant glass protection on top.

The Pixel 4 XL is highly praised for its premium display experiences and top-notch camera results. However, the narrator in the JerryRigEverything video showcases that the phone fails to pass the bend test.

"The screen keeps the phone structurally solid with no kinks or cracks in the frame bending... though, there's a loud pop," the narrator says in the video.

Despite being of metal, the frame of the Pixel 4 XL cracked during the bend test. The flaky paint of the frame also came out just after bending the phone forcibly. Further, antenna lines also emerged once the paint went off.

All this points out some of the key structural weak points of the Pixel 4 XL. However, the display panel, irrespective of the bends and cracks, is seen operational in the video.

"It's not a total failure but for this price point is kind of ridiculous," the narrator states.

Of course, you wouldn't face any issue in regular use of the Pixel 4 XL. The body, however, may get bent or cracked if you keep it in your back pocket.