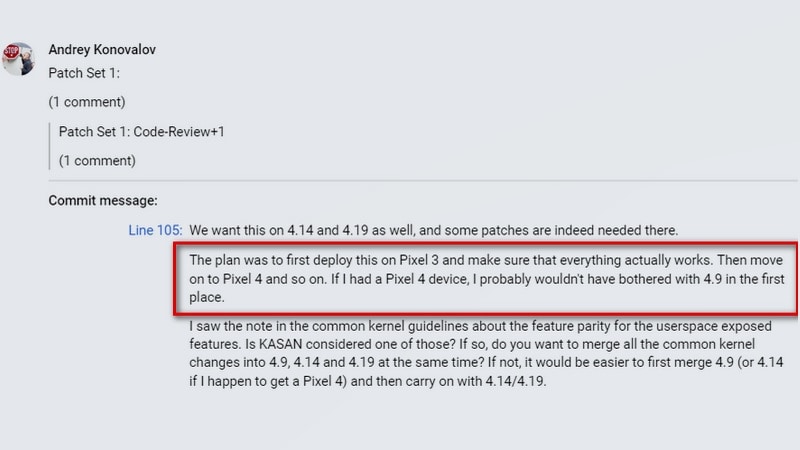 Google Pixel 4 is in the news again, ahead of its launch in the second half of the year. In February, commit changes spotted in the AOSP (Android Open Source Project) Gerrit had indicated that the Google Pixel 4 might offer improved dual-SIM functionality. While the report was interesting, it also marked the first time that something concrete related to the Pixel 4 had surfaced online from a reliable source. But that is not it, as the Pixel 4 has again been spotted in commit changes on the AOSP (Android Open Source Project) Gerrit regarding an issue spotted in the Linux kernel. While not much is revealed about the Pixel 4, the new finding indicates that the next Pixel flagship is under testing.

A new commit on the AOSP (Android Open Source Project) Gerrit by a Google employee dated April 2, which was spotted by 9to5Google, talks about issues related to fixing “false positive KASAN warning on suspend/resume”. KernelAddressSanitizer – KASAN – for short, is a dynamic memory error detector. It provides solutions for finding use-after-free and out-of-bounds bugs in Linux kernel that send false positives. In simple words, these bugs send an error report when no such issue exists in the first place.

Regarding the same with reference to the Pixel 4, a Google employee commented, “The plan was to first deploy this on Pixel 3 and make sure that everything actually works. Then move on to Pixel 4 and so on. If I had a Pixel 4 device, I probably wouldn't have bothered with 4.9 in the first place”. While the information is not substantial and of much importance from a users' perspective, it does indicate that the Pixel is under testing among Google's developers group working on resolving issues.

The Pixel 4 is still months away from launch, and so far, we are yet to see any reliable leaks regarding its hardware specifications and features. Back in February, commit changes spotted in the AOSP (Android Open Source Project) Gerrit indicated that the Pixel 4 might offer true dual-SIM functionality by bringing support for Dual SIM, Dual Standby (DSDS) protocol. The following month, alleged schematic for the Pixel 4 XL surfaced online showing a punch hole design similar to the Samsung Galaxy S10+, but without a chin and uniform bezels around the edges. The schematic pointed towards dual front and rear cameras as well as an in-display fingerprint sensor on the Pixel 4 XL.