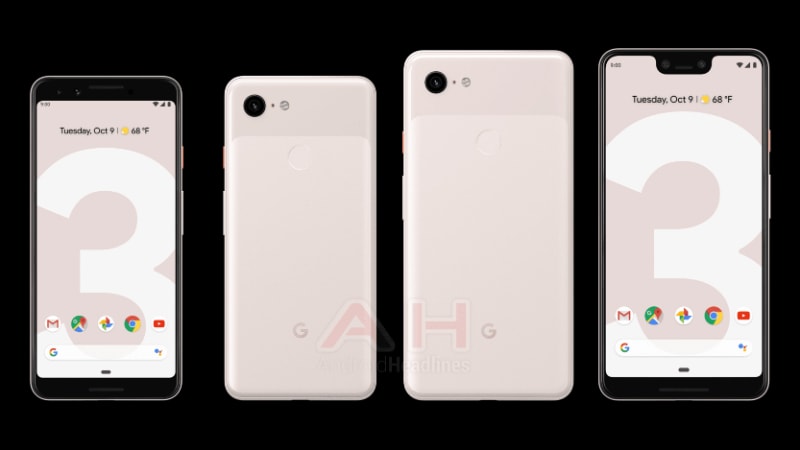 Folks at Android Headlines have leaked a render showing the Pink colour option of the Pixel 3 and Pixel 3 XL. The render details both new Pixel models from their front and back panels and shows the new paint job that covers not just the matte part of the back panel but also the glossy area that is available on the top of the rear side. Also, there is the power/ lock button in deeper Pink colour. The frontal panel, however, features a Black bezel frame - similar to what on the Black and White coloured Pixel 3 models.

Roland Quandt of WinFuture tweeted late last month that the third colour option of the Pixel 3 and Pixel 3 XL will be called "Sand". The Pink colour variant is, thus, likely to be officially dubbed Sand. Some previous rumours suggested that Google could also unveil a Mint colour variant of the new Pixel models. The search giant even hinted at the Mint colour option by launching the Home Mini in Aqua colour option. A teaser by the company also suggested the new colour option. Having said that, there aren't any renders or leaks supporting the speculation - though a batch showed a White Pixel 3 XL with Mint coloured buttons.

Aside from the rumour around the new colour option, Spigen has listed cases of the Pixel 3 and Pixel 3 XL. There are as many as 18 Spigen cases of the upcoming Pixel models that come in a variety of options such as Thin Fit 360, Tough Armor, Slim Armor, Armor Crystal, Rugged Armor, and Thin Fit. The company also has the Liquid Crystal case that could highlight the new colour options, including the Pink or Mint paint job. Furthermore, there are some thin options that are likely to support the Active Edge feature.

While most of the Spigen cases are available for purchase, there are some variants that are listed as "coming soon." We presume that all these cases will be available soon after the launch of the Pixel 3 models. The cases show single rear cameras and rear fingerprint sensors on both phones, and the presence of a display notch on the Pixel 3 XL.

The Pixel 3 and Pixel 3 XL are expected to run Android 9.0 Pie out-of-the-box. In the new range, the Pixel 3 XL is rumoured to feature a 6.2-inch QHD+ (1440x2880 pixels) display option, while the Pixel 3 could come with a 5.5-inch display. The smartphones are also likely to come with a Qualcomm Snapdragon 845 SoC, along with Adreno 630 GPU and 4GB RAM. Both are also expected to have a dual selfie camera and a fingerprint sensor at the rear.

Nokia 6.1, Nokia 6.1 Plus to Receive Android Pie Update This Month; Nokia 8, Nokia 8 Sirocco to Get It in November