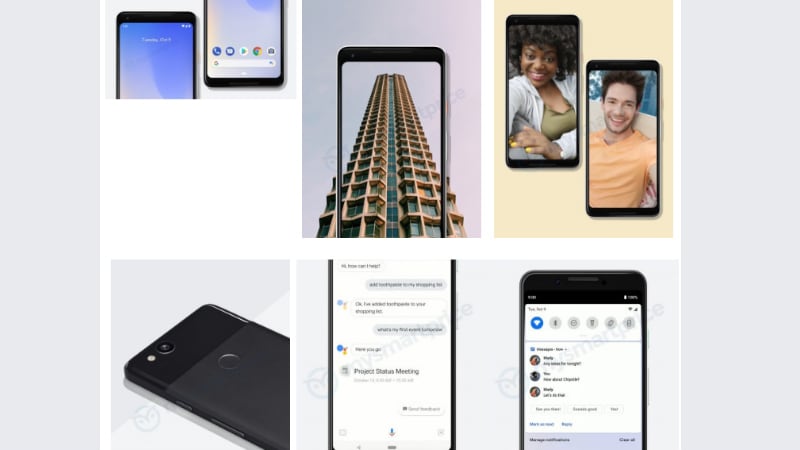 We're just over a week away from the official Google event on October 9, where it is largely expected to launch the new Pixel 3 and Pixel 3 XL devices. Fresh leaks bring marketing images of the Pixel 3 and Pixel 3 XL variant, and a leaked video explains all that you can do on the bigger device. Furthermore, a hands-on video of the XL variant has also surfaced giving us a look at the device from all angles, whilst also highlighting the differences between the Pixel 3 XL and its predecessor, the Pixel 2 XL.

Starting with the marketing images and video, MySmartPrice seems to have sourced the video from the Pixel Tips app that will be pre-installed in the Pixel 3 and Pixel 3 XL. The marketing images give us a look at the design, corroborating past leaks. The Pixel 3 is seen with no display notch, and considerable bezel on the top and bottom of the display. A single camera and a fingerprint sensor are also seen at the back of the device. The video details all the cool new things you can do courtesy Android 9 Pie baked into the Pixel 3 and Pixel 3 XL. Notable features in the video include the ability to understand the name of a restaurant in an email, and giving options to make a reservation directly. The camera app can scan a business card, and use the email address to send a mail in few simple taps. A new double twisting gesture allows users to switch between the front and the back camera.

Separately, YouTuber Rozetked has published a detailed high-resolution hands-on video showing off the Pixel 3 XL and comparing it with the Pixel 2 XL. In his video, the Pixel 3 XL sports a tall notch, and a bulky camera ring at the back, that makes the device wobble a bit when used on a flat surface. He claims that the display on the Pixel 3 XL has been improved a lot, compared to the second-gen model, and touch feedback has improved too. He asserts that the camera is the best in class still, leaving behind the Samsung Galaxy Note 9 and even the iPhone XS. He also tips that Google may be releasing a new Pixel 3 Ultra variant too, with a bezel-less screen.

The Pixel 3 series is expected to come in Black and White colour options at least. It is tipped to sport improved cameras, a Snapdragon 845 SoC along with an Adreno 630 GPU and 4GB of RAM. A recent listing by China's JD.com has shown that the Pixel 3 will come with a price tag of CNY 4,999 (roughly Rs. 52,800). However, the price of the Pixel 3 XL is yet to be revealed. In any case, all rumours will be put to rest on October 9.

Elon Musk Sued By US SEC for Fraud, Removal as Tesla CEO Sought
Hellboy Release Date Pushed Back to April 2019