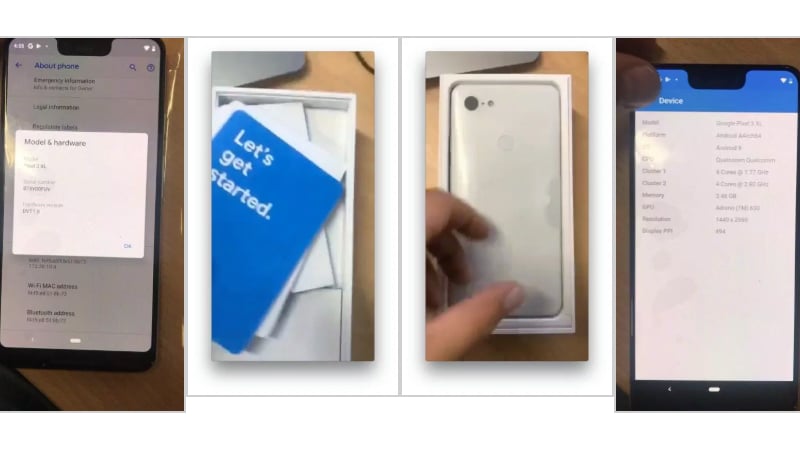 Google's upcoming models for its Pixel series have been leaked extensively and now fresh images show the Pixel 3 XL in a working condition, its retail box, and its internal components as well. The images reveal that the Pixel 3 XL will continue to sport a single rear camera setup, a rear fingerprint sensor, a display notch in the front, and slight bezel at the bottom of the device. The images show the Pixel 3 XL switched on and in working condition, lending weight to its legitimacy.

The images were spotted on Imgur, but they seem to have first surfaced on a Russian Telegram channel, as per a report by Android Police. A ton of images have been leaked showing the retail box, the earphones, and the charging adapter as well. A white variant of the Pixel 3 XL is seen in the images, and it looks to have a glass back hinting at wireless charging capabilities. The images reiterate that the Pixel 3 XL will sport a display notch.

The retail box reveals that the Pixel Buds-style headphones with adjustable ear inserts, and the wired USB Type-C cable are all packed inside. There is also a USB Type-C to 3.5mm adapter as well, and the manual instruction leaflet also includes a Team Pixel sticker.

The Google Pixel 3 XL was also spotted on a benchmark listing, and it was listed to sport a QHD+ (1440x2960 pixels) display panel, a Snapdragon 845 SoC under the hood, coupled with 4GB of RAM. The Pixel 3 and Pixel 3 XL are both expected to launch on October 4, and both the smartphone will run on Android 9 Pie out of the box.

A new hands-on video said to be of the Pixel 3 XL, seen above, shows the phone from all sides, in action, and also running an AnTuTu benchmark that reveals some specifications. It is seen to sport a 6.7-inch display, a 3,430mAh battery, a 12.2-megapixel rear camera, and three 8.1-megapixel front cameras - one of which is speculated to provide Face ID style recognition, and another is thought to be either a reporting error by AnTuTu or a virtual sensor.