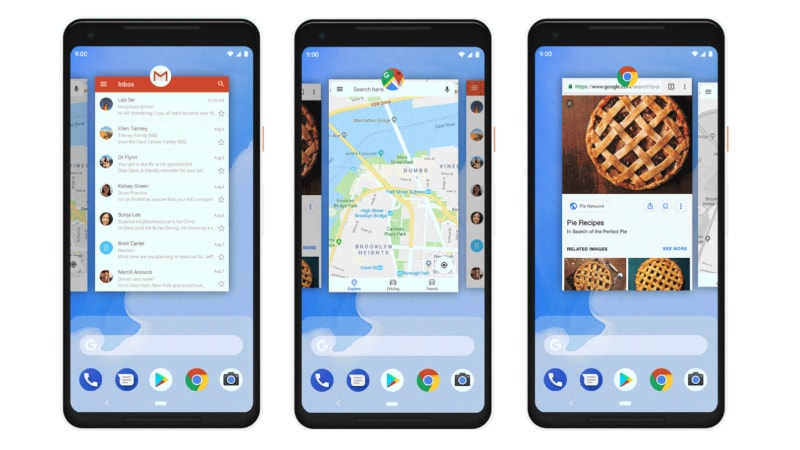 Google has officially released Android 9.0 Pie and the latest operating system is now rolling out to all Google Pixel smartphones. The successor to Android Oreo comes with several upgrades, the most notable one is the gesture-based navigation system. However, the feature isn't enabled by default when the smartphone is upgraded. Though, as per a new report citing a Google UX executive, in Google Pixel 3 the feature will be the only option that users will have. According to Google, gesture navigation will not only be the default in the company's next flagship, but the only navigation method in the handset.

Talking to Android Central in an interveiw, EK Chung, UX manager for Android handheld and Pixel at Google, revealed the company's stance on design with Android 9 Pie. He also provided some interesting details about Google's plans for the new navigation method. He noted that that the Pixel 3 lineup will ship with gesture navigation, and there will be no option to use the standard three-button layout that people are Android users are used to. "While Pixel devices that are updated from Oreo will still see their three-button navigation by default with an option to switch to gestures, future Google phones (and any other manufacturer that wants it) will ship with only gesture navigation," Chung was quoted as saying.

With Android 9 Pie, Google has taken the first step towards gesture-based navigation that was earlier seen in Apple iPhone X. While the traditional three buttons are available for navigation, you can switch to having a single bar visible and use gestures for navigation. Swipe up on the bar once and it opens up recent apps, swipe up again to open up the app drawer.

Notably, the Google Pixel 3, Pixel 3 XL launch date is reportedly set for October 4. The Pixel 3 XL is expected to come with a Snapdragon 845 SoC, coupled with 4GB of RAM, and run Android 9 Pie out-of-the-box. The Pixel 3 is also likely to have identical hardware and software combination, though in a smaller package and with a cheaper price than the massive Pixel 3 XL. It is rumoured that the Pixel 3 will come with a 5.4-inch display, while the Pixel 3 XL will have a 6.3-inch display. Furthermore, the new Pixel models are likely to come with a display notch and single rear camera sensors. It is speculated that Google will also offer wireless charging support on the upcoming Pixel handsets and will offer a dedicated wireless dock at the launch.