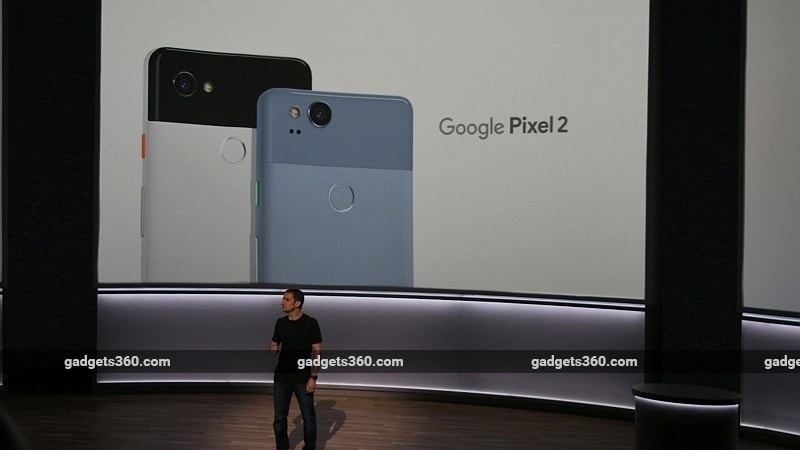 Google Pixel 2 launch event saw the launch of the successors of last year's Google smartphones. Both the Pixel 2 and Pixel 2 XL come with several upgrades over their predecessors in order to take on the likes of Apple iPhone X and Samsung Galaxy Note 8. As for the features, the Pixel 2 and Pixel 2 XL will offer major upgrades in the camera department, squeezable frame, and stronger software integration to deliver a more personalised experience to the user. The two smartphones aren't too different from each other, like the Google Pixel and Google Pixel XL, with the display size and battery capacity being the biggest differences. However, fans will miss out on the 3.5mm headphone jack, which has given way to USB Type-C for both charging and music.

The company has confirmed that Pixel 2 price in India for the 64GB variant will be Rs. 61,000, and Rs. 70,000 for the 128GB variant. The prices in India of Pixel 2 XL for the 64GB and 128GB variants are Rs. 73,000 and Rs. 82,000, respectively. While the smartphones will be available from over 1,000 offline stores in the country, they will be exclusively available online via Flipkart. India pre-orders for the Pixel 2 and Pixel 2 XL start from October 26; the former will then go on sale on November 1 and latter on November 15.

In the US, prices start at $649 (roughly Rs. 42,235) for Pixel 2, and $849 (approximately Rs. 55,250) for Pixel 2 XL. The Pixel 2 will be available in Just Black, Clearly White, and Kinda Blue colour variants, while the Pixel 2 XL will be available in Just Black and Black & White colour variants. In the US, buyers get the Google Home Mini for free bundled with the smartphones, for a limited period - no such offer was announced for India.

The Active Edge feature (similar to what we saw with the HTC U11's EdgeSense) gives the smartphone a 'squeezable frame' that lets them summon Google Assistant whenever they feel like. No further details on when additional functions will be introduced. As for the decision to use different aspect ratios on the two phones, Mario Queiroz, Vice President, Product Management, Hardware, said this to to Gadgets 360 in a latter interaction, "We looked at a combination of things for the smaller phone, and based on all the things we were trying to do with it, we chose not to go 18:9 on that phone. It was most important to bring resolution and contrast ratio to that phone, at the relatively low price point, so that was a choice we made."

On the photography front, the Pixel 2 and Pixel 2 XL offer the industry-best camera sensors. How good? According to Google, DxOMark has given the new camera on Pixel 2 a score of 98. Both the phones house a 12.2-megapixel rear camera with f/1.8 aperture and optical and electronic image stabilisation. The front facing 8-megapixel camera has an aperture of f/2.4. The handsets come in 64GB and 128GB storage variants. Google is promising unlimited online storage for photos and videos, with original quality storage until January 15, 2021.

Connectivity options on the Google Pixel 2 and Pixel 2 XL include 4G VoLTE, dual-band Wi-Fi 802.11ac with 2x2 MIMO, Bluetooth v5.0, USB Type-C (3.1), NFC, an eSIM module (for Project Fi use), as well as GPS/ A-GPS. There is no 3.5mm headphone jack, but the smartphone ships with a 3.5mm to USB Type-C adaptor. Notably, no earphones ship in the box, as per Google's product page.

Apart from the Pixel Imprint fingerprint sensor on the rear panel, and the Active Edge sensor, the smartphones feature an accelerometer, ambient light sensor, barometer, gyroscope, magnetometer, and proximity sensor. The company is also touting "advanced x-haptics for sharper/defined response."

Another highlight feature is something called 'Now Playing', which is always-on music identification feature. It's powered by an app on Google Play called Pixel Ambient Services. It essentially uses no data to identify songs playing in the background.

Speaking to Gadgets 360, Google's Brian Rakowski, President, Android Platform, explained how the Now Playing feature works, "Even if you phone is in Airplane mode, if there's an ambient song playing, it will look for audio pattern which the machine learning in the phone would believe to be music. It samples it and tries to match it with an on-device library of fingerprints of tens of thousands of songs. The songs are chosen based on what's though to be popular in that country.If the music isn't in the library, it won't recognise it. It uses very very little on-device storage (no real number given though). The list refreshes almost every week."

"We are really proud of how the Pixel smartphones did last year," said Rick Osterloh, Senior Vice President of Hardware at Google. But for this year, Osterloh said, the company has imagined the hardware inside out, instead of just packing in the most extreme modules.

A lot is riding on these new smartphones. The Google Pixel 2, and the Google Pixel 2 XL are supposed to be the best representation of what Android smartphones should be like. For Google, which has been in the recent years attempting to assume more control over devices, being able to sell enough of them would be a priority as well. According to estimates, Google had sold about one million Pixel smartphones by May this year, even when they were lauded with positive reviews by critics.