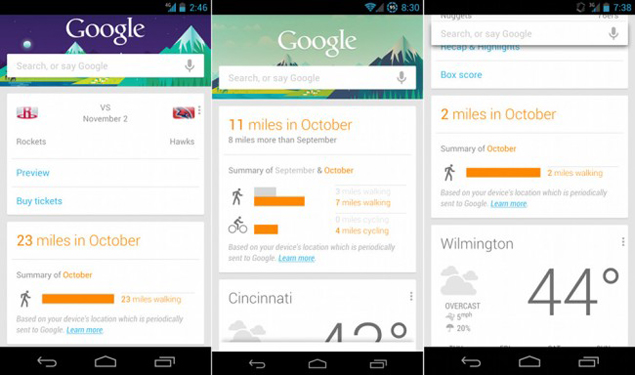 Google introduced Google Now for Jelly Bean users, a feature that was recently improved with the updation of Google's Search app. Google Now displays various kinds of information such as flight details, nearby restaurants, traffic updates and more in the form of cards. But Droid Life reports of a new unofficial feature that has apparently been seen by many Android users.

Google Now has an unannounced pedometer card that tracks a user's walking and biking distances for the previous months. The images posted by the site reveal distances traveled in miles, with one image showing a "summary of September & October". This indicated that the feature has been in existence at least since September, if not longer.

The card shows activity by type, which Google has been tracking using the GPS location of the user. The card also lists a "Learn More" link below the results prefixed by a statement which reads, "Based on your device's location which is periodically sent to Google."

Some users reported that the feature is showing inappropriate information. One such user stated that it a biking distance of 11 miles, when the user didn't even own one in the first place. Another such user reported Google Now displaying incorrect information regarding 53kms of biking distance each month.

The site also states that the feature isn't mentioned under Google Now settings. Though some may welcome this feature to get motivated to stay healthy, for others it is raising red flags regarding invasion of privacy, with some thinking it's a bit creepy.

The concerns were evident when Google first gave a glimpse of the feature at it I/O conference in June. Google Now presents information that the search giant already collects about users on a daily basis. This includes not just accessing a user's email, calendar, and contacts but also scans their photos and automatically identify them based on their subject. Further, it also knows where you live and and tries to chalk out alternative routes in case of traffic jams.