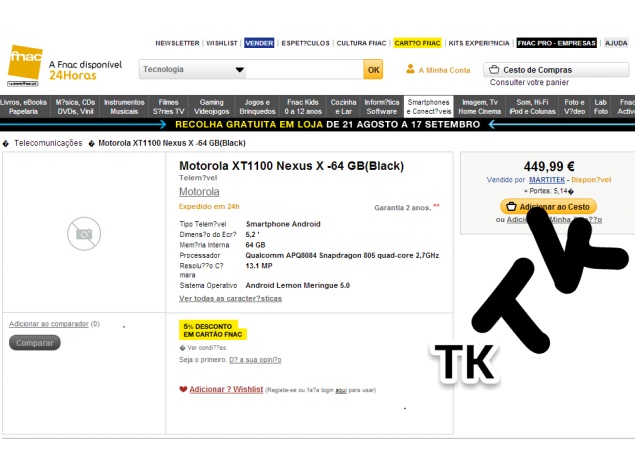 Google's much-anticipated successor to the Nexus 5 has reportedly been spotted again as the Motorola Nexus X XT1100 on a third-party retailer website in two storage variants.

Screenshots of the latest retailer listings (now pulled) were posted by Tktechnewsblog, the website that had earlier leaked a screenshot of a Motorola Nexus X XT1100 listing at US retailer Best Buy.

The latest listing on the Portugal store of French retailer Fnac revealed the pricing for two variants of the yet-to-be-announced Nexus X by Motorola.

The listed specifications by Fnac had included a 5.2-inch display; quad-core 2.7GHz APQ8084 Snapdragon 805 SoC; 13.1-megapixel primary camera, and Android Lemon Meringue 5.0. Notably, the specifications on the 32GB listing page contrarily shows a 6.3-inch display - effectively discrediting both listing pages. The processor and OS are similar to what was seen on the Best Buy listing, however, the 5.2-inch display on the 64GB Fnac listing is smaller than the 5.9-inch Quad-HD (1440x2560 pixels) display listed by US retailer.

Earlier, the anticipated smartphone was allegedly listed in benchmarks specifications as 'Google Shamu', with a 5.2-inch Quad-HD (1440x2560 pixels) display, a quad-core 2.7GHz (precisely 2649MHz) Snapdragon 805 processor (APQ8084), Adreno 420 GPU, and 3GB of RAM. The primary rear camera was suggested to be a 13-megapixel camera, while there will be a 2.1-megapixel front camera also onboard. The device was also listed to run Android L.

For the release date, an earlier PhoneArena report had claimed that the website has been told that Google is planning a secret launch around Halloween (October 31), just like the launch of the Nexus 5. The report had also noted that Google might launch the alleged Nexus X without an announcement.
Comments