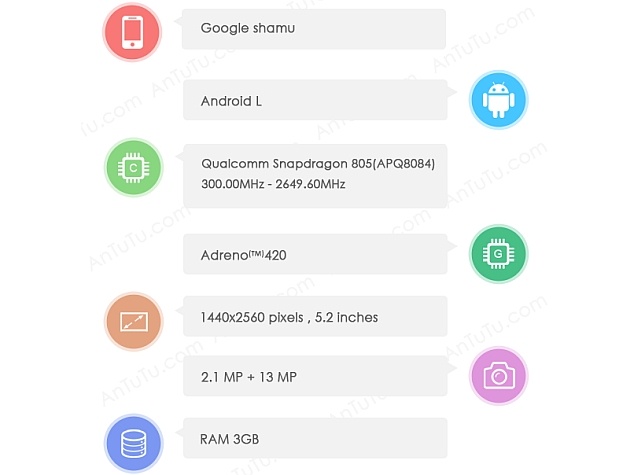 Motorola's much-leaked 'Shamu' handset is rumoured to be the next Nexus smartphone, expected to be called the Nexus 6. A new report points to an alleged Shamu benchmark listing which includes specifications, while another report indicates an October 31 launch date.

Benchmark results of a device called 'Google Shamu' have been spotted on the AnTuTu website, and list such specifications as a 5.2-inch Quad-HD (1440x2560 pixels) display, a quad-core 2.7GHz (precisely 2649MHz) Snapdragon 805 processor (APQ8084), Adreno 420 GPU, and 3GB of RAM. The primary rear camera is suggested to be a 13-megapixel camera, while there will be a 2.1-megapixel front camera also onboard. The device is also said to run Android L.

Finally, we come to the newest rumours about the launch date of the Nexus 6 - which point to an October 31 unveiling, just like the Nexus 5 last year. Sundar Pichai during MWC had indicated the next Nexus smartphone would arrive sometime in the second half of 2014 only.

Last month, the next iteration of the Nexus phone was allegedly spotted at the Google issue tracker, which showed the 'Shamu' reference for a device. A report had claimed that the user who filed the bug with 'Shamu' reference in the Google issue tracker was a company named Spirent Communications, which tests devices for errors. The report had also indicated that the next Nexus smartphone built by Motorola will sport a 5.9-inch display and come with a fingerprint sensor.
Comments