Google Nexus 4 8GB variant sold out on US Play store, not coming back 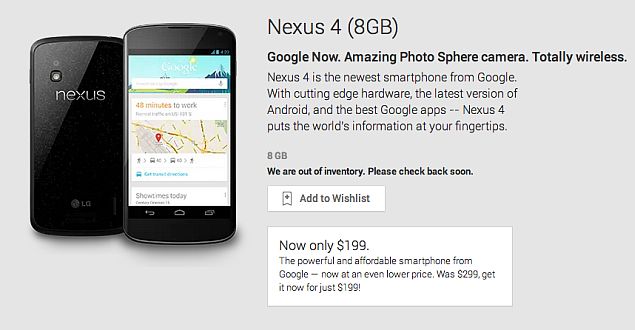 After getting a $100 price cut, last week, the 8GB storage variant of Google's Nexus 4 is sold out on the Google Play Store in the US.

According to a report by Droid Life, the 8GB version of the device which was being offered at a the new price of $199, is no longer in stock. Google has confirmed to The Verge that the variant would not be restocked. This implies that Google is holding a clearance sale in order to get rid of existing Nexus 4 stock, probably ahead of the launch of a new Nexus smartphone device.

The 16GB version of the Nexus 4 is still available in the Play Store for $249.

The news comes amidst several rumours around possible Nexus 4 successors. Recently, a rumour claimed that the next iteration of the Nexus phone, will be unveiled later this year and Google owned Motorola will be working on the device. The rumour came from Taylor Wimberly, a technology journalist. However, nothing has been confirmed by the search engine giant yet.

The Droid Life report also cites sources to mention that the next Nexus phone should arrive sometime in October, possibly around October 31, and that it is expecting a re-release of the Nexus 4 with a different device maker taking charge. It also claims to have knowledge of a phone codenamed "hammerhead" attached to a new version of Nexus under "Nexus 4" moniker. However it doesn't dismiss a possible Nexus 5 device, as well.

Going by the Nexus 7 refresh, it's possible that Google might choose to retain the Nexus 4 name, upgrading the internals of the device. The Nexus 4 has done well as Google's flagship smartphone device gaining popularity among consumers in addition to developers. Google showcases its Android mobile operating system in stock form (without any additional user interface tweaks) through its Nexus devices.