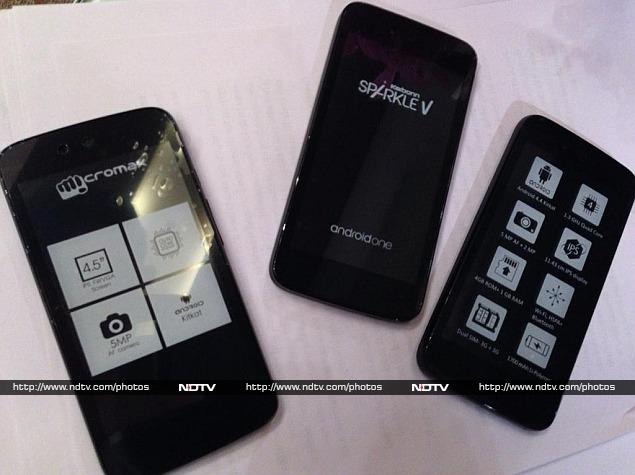 Google has launched the first family of Android One phones in India, saying the move is part of a "larger initiative to bring high-quality smartphones to as many people as possible."

The search giant announced the first Android One smartphones - the Karbonn Sparkle V, Micromax Canvas A1, and Spice Dream Uno - will be available from their respective online retail partners in India from 3:30pm on Monday, with physical retail store availability in early October.

Google says the Android One phones offer a high-quality experience, running the Android 4.4 KitKat. The company added these phones will be the first to receive the Android L release, an update that Google says will offer the new "material design, improved battery life, enhanced security features, and smarter notifications."

Google also announced that Airtel is offering a promotion to reduce data costs for those who buy Android One phones. With an Airtel SIM card, Android One users will get free over-the-air (OTA) updates, and 200MB per month worth of app downloads from Google Play for the first six months - all without counting toward their mobile data plan. Additionally, Google is touting the a data compression feature on Android One's Chrome browser.

The search giant also announced that in the coming weeks the YouTube app will get offline video playback in India, allowing users to store videos via Wi-Fi on their Android device, and watch them later without data connectivity.

Sundar Pichai, Google Senior Vice President of Android, Chrome & Apps, announced an expanded set of hardware partners for the Android One initiative, including Acer, Alcatel Onetouch, Asus, HTC, Intex, Lava, Lenovo, Panasonic, and Xolo, as well as chipmaker Qualcomm. The company also announced that Android One phones will launch in Indonesia, the Philippines, and additional countries in South Asia by the end of the year.
Affiliate links may be automatically generated - see our ethics statement for details.

Spider-Man Unlimited Review: Subway Surfers With a Splash of Marvel
Android One Was Conceived With India in Mind, Says Google's Sundar Pichai