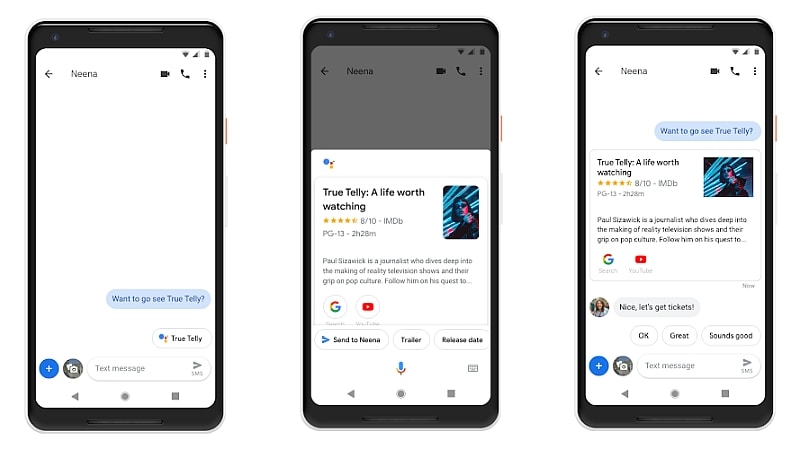 Google Assistant will be accessed on Android Messages through suggestion chips

Notably, Google had brought the Assistant integration within its Allo chat app in the past. But since the Allo is departing next month, Google is now all set to bring a similar, smart texting experience directly to the Android Messages app that comes preloaded on a large number of smartphones. The company says in a blog post that over the coming months, the Messages app will start showing suggestions directly from the Google Assistant about movies, restaurants, and weather. The feature will initially be limited to English users, though.

Once you tap one of the suggestion clips, the Messages app will open the Google Assistant to help you with the relevant information. You would also be able to long press the Home button with the Messages app open on your device and then the Assistant will pop up to help.

In addition to bringing the Assistant to the Messages app, Google is bringing as many as eight new Indian languages, including Bengali, Gujarati, Kannada, Malayalam, Tamil, and Urdu. The company importantly brought Marathi and Hindi last year.

The Google Assistant has also expanded the multilingual experience and now lets you select language pairing from Danish, Dutch, Korean, Hindi, Norwegian, and Swedish in addition to the existing languages, including English, Spanish, German, French, Japanese, and Italian.

At the CES last month, Google announced the Assistant integration within Google Maps. The company is now expanding its integration by bringing the experience to all Assistant phone languages. It has also partnered with vendors such as Xiaomi, Vivo, and TCL to bring a dedicated Google Assistant button on various new Android devices.

Google is also bringing a Voice Typing feature to KaiOS. This enables the Google Assistant to translate speech to text directly from a feature phone, such as the Jio Phone. "With the cursor in the right field, you can press and hold the Assistant button on your phone and use your voice to dictate your text messages, web searches or anything else that has a text field," Google Assistant Vice President Manuel Bronstein wrote in its blog post while explaining the voice typing feature.

"In the coming months, developers will be able to release their Actions on Android 9 Pie (Go edition) and KaiOS devices so entry-level smartphone and feature phone owners can access more locally relevant experiences," said Bronstein.