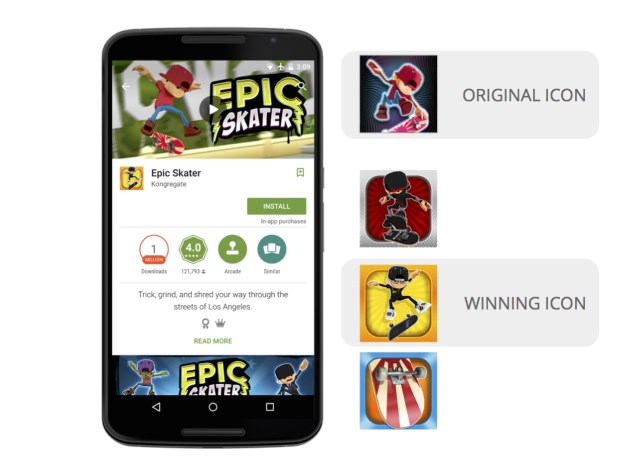 Amongst the many announcements made at its 2015 I/O Conference, Google has taken the wraps off a handful of improvements designed to help developers attract more traffic to their app listings and convert more visits into downloads. The two biggest features are A/B testing for listings and an improved developer page experience.

Google will now allow 'Experiments' from the developer console, which let developers choose up to three alternative sets of graphics and text descriptions for their app listings. These alternative listings will be shown to some visitors, and statistics about engagement and installs will be shown to developers so that they can determine which version of the listing was most appealing and effective, thereby optimising potential. According to Google, some developers achieved double-digit install rate improvements in a pilot program conducted prior to the announcement.

Developer pages are also to be overhauled with a large banner graphic, company logo, descriptive text and improved catalogue display. Companies will also be able to feature one app or update prominently on their page to drive traffic. Those with lots of apps in the Play Store will benefit the most, and will be able to use their developer page as a homepage to promote all offerings in one place.

Google stated that it intends to make developer homepages more prominent and easier to find. One way to do this will be the creation of sections based on broad interests such as shopping, with subsections such as coupon apps and fashion apps. These will appear in search results to increase the chances of users discovering new and unfamiliar apps that suit their requirements.

There will also be a new easy way for people to discover family-friendly apps and content. A new star icon will lead users to a section highlighting apps approved for the Designed for Families program, sorted by suitable age ranges.

To further boost user acquisition, developers will be able to create and roll out ad campaigns right from the developer console. Only a budget needs to be set, after which Google will scale the campaign out across all its properties including Google Search, AdMob, YouTube and new Google Play search ads.

Developers will also be able to submit apps for testing across a wide variety of actual Android devices that they otherwise would not have access to. Given the fragmentation in terms of screen size, resolution, CPU power and OS version, developers would be able to identify and fix real-world issues that would otherwise not be identified till someone encountered them and complained.