Gold iPhone 5s is a smash hit in Asia 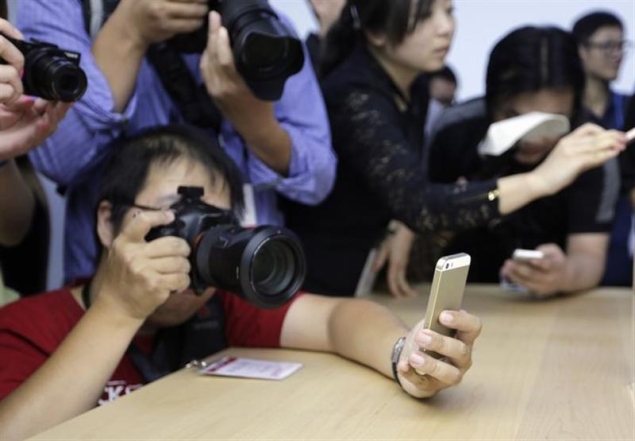 Asian consumers have snapped up Apple's first gold-coloured iPhone, but many were left disappointed and frustrated at missing out during Friday's highly anticipated global launch of the 5s.

From Japan to Singapore, China and Hong Kong, there was a particular clamour for the gold-coloured version, closely associated with wealth in Asian cultures.

It was not clear how many of the golden 5s also available in silver and "space grey" were available.

Some people had been able to pre-order, if they were fast enough, but those who had not queued early or even overnight to get a piece of the "gold rush".

"Our gold-colour iPhones were completely sold out within four minutes when we opened online reservations on September 18," a spokesman for market leader Singapore Telecom told AFP.

Long lines snaked through SingTel's launch event at the cavernous Marina Bay Sands convention centre as thousands of Apple fans who had made online reservations trooped there to pick up their new gadgets.

John Yap, the first in line, said he decided to buy the golden iPhone because it was "refreshing and a welcome change from the look of all the previous models".

The 24-year-old accountant queued for nearly 12 hours before he got his hand on a 64-gigabyte version, but said the wait was well worth it.

"I think it's worth the time especially when it is something you cherish. It is just like queing for concert tickets," he told AFP.

A spokeswoman for StarHub, another Singaporean carrier, said the gold iPhone 5s (Review) was sold out within an hour in its 10 outlets across the city-state.

Singapore's third carrier, M1, also ran out of the golden phones, according to a chart on its website.

There were similar scenes elsewhere in Asia.

Those looking to get their hands on Apple's much-coveted latest offering said they did not mind the cost of the 5s at least 5,288 yuan ($864).

"The colour is very special.. I believe in Apple's idea of design, so golden colour must be excellent.

"Though some people on the Internet say the golden colour is for nouveau riche, I don't think so."

Favoured by emperors and representing wealth and luxury in Chinese culture, gold has become a badge of the country's newly wealthy.

In status-conscious Hong Kong, the golden version was almost nowhere to be found.

"We were able to acquire the 16 gigabyte models, we've gotten around 30 to 40 of the gold ones," Lau Chi-kong, of G-world Mobile in the commercial district of Mong Kok, told AFP, which he described to be a small number.

"I think Apple released a limited amount of the gold version," Lau said.

Lau will sell the 16 gigabyte version of the gold coloured phone for HK$10,800, almost double its retail price, he said.

"There is demand for it, everyone wants it," he added.

Some customers who were left empty-handed vented their frustration online.

"What's the point of having priority to purchase when (companies don't) even provide sufficient phones for us?" asked Lipingg Jaimelody on M1's Facebook page.