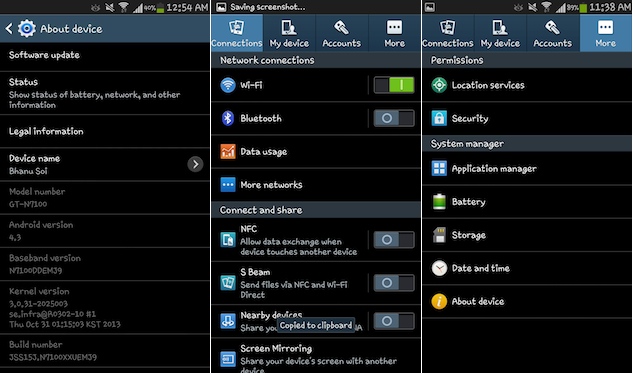 It appears that the Samsung Galaxy Note II, the company's popular phablet, could soon receive an over-the-air Android 4.3 software update as Samsung service centres in India have reportedly got access to the new update.

An Indian user claims to have updated his Note II to Android 4.3 through a Samsung service centre, according to a report by SamMobile.

The report adds that the build number of the firmware update is N7100XXUEMJ9, with a build date marked as October 31, so it's likely that it's the final version of the update and it could soon be rolled out soon officially, over the air. The website has also published screenshots from the updated phone, which it claims to have received from the user.

The update will make the Galaxy Note II compatible with the Galaxy Gear smartwatch and also bring other updates including improved text input; updated graphics and multimedia; Samsung KNOX (only for selective countries); Smart Switch, for transferring content to Galaxy devices from other smartphones; HomeSync, for sharing and storing content, and Group Play 2.5.

Earlier, a report had indicated that the Samsung Galaxy S4 and Galaxy Note II would also be upgraded to Android 4.3 Jelly Bean by year-end.