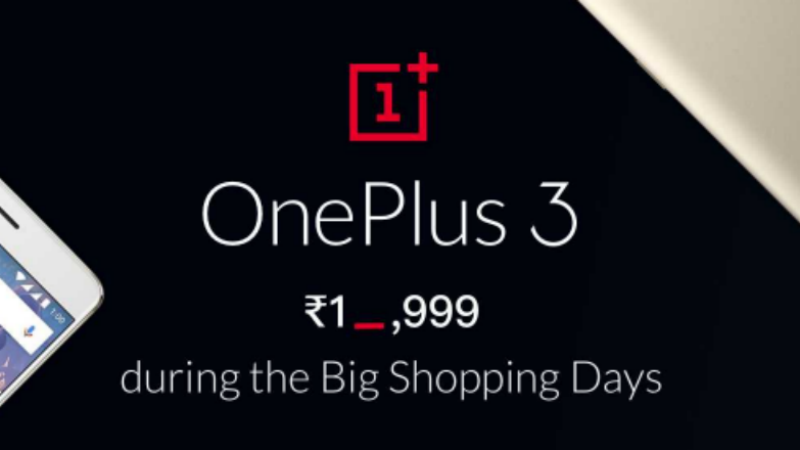 Those who opened Flipkart today were greeted by a huge banner for the sale of the OnePlus 3 smartphone during the company’s upcoming Big Shopping Days sale, which kicks off on Sunday. Interestingly, the banner contained hugely discounted pricing for the OnePlus 3 of under Rs. 20,000. This comes as a big surprise, considering the Chinese brand exclusively sells its smartphones via Amazon India in the country. OnePlus Co-Founder Carl Pei expressed his surprise as well, in a tweet questioning how Flipkart is planning on selling the smartphone.

As we mentioned, the OnePlus 3 sale on Flipkart was, in fact, a surprise for OnePlus Co-Founder Carl Pei too, who tweeted to the Indian e-commerce company’s Executive Chairman and Co-Founder Sachin Bansal, saying “What's this? We're exclusive with Amazon.”

There has been no response to Pei’s tweet from Bansal or Flipkart yet.

On the matter, Flipkart in a statement to Gadgets 360 said, "Flipkart is a marketplace which helps sellers connect with customers across the country. All our sellers are mandated to adhere to stringent guidelines. The prices and discounts for all our sales are decided by the participating sellers and brands"

This is obviously a vague statement that does not address any of the concerns being raised by the OnePlus co-founder. Flipkart is claiming that it has no control over its platform, its huge banner displays, or its social media channels.

OnePlus said on the matter, "We have an exclusive partnership with Amazon in India. We advice customers to purchase OnePlus products only through official channels as we cannot guarantee the authenticity of the products sold elsewhere."

For now, it seems that OnePlus 3 will be sold on Flipkart by third-party sellers, but will not carry the official warranty, and may not be authentic since it has been not been acquired from official channels.

As we mentioned, the price tag mentioned in teaser image suggested that the OnePlus 3 will be priced under Rs. 20,000 on Flipkart, against its Amazon price of Rs. 27,999.

On Flipkart’s OnePlus 3 landing page, the 64GB Soft Gold model is listed as coming soon, and priced at Rs. 27,999, so the sub-Rs. 20,000 price tag mentioned in the teaser is likely to be the cost after cashbacks and exchange discounts. Flipkart has not mentioned when the smartphone will be launched on its platform.

The OnePlus 3, which we found to be a pretty good smartphone, has been upended by the launch of its successor OnePlus 3T (Review) just months after its release. The new smartphone brings a host of improvements, such as faster processor, better front camera, and bigger battery, and costs just Rs. 2,000 more. On the other hand, the OnePlus 3T 128GB variant is priced at Rs. 34,999.

(Also see: OnePlus 3T and Other Phones That Ruined Things for Early Adopters)

With the OnePlus 3T launch, there were some questions about whether the OnePlus 3 will be discontinued in India, as it has been in the US and European markets. However, a company official has told Gadgets 360 that it plans to keep selling the OnePlus 3 in the country, though the focus will shift to OnePlus 3T.