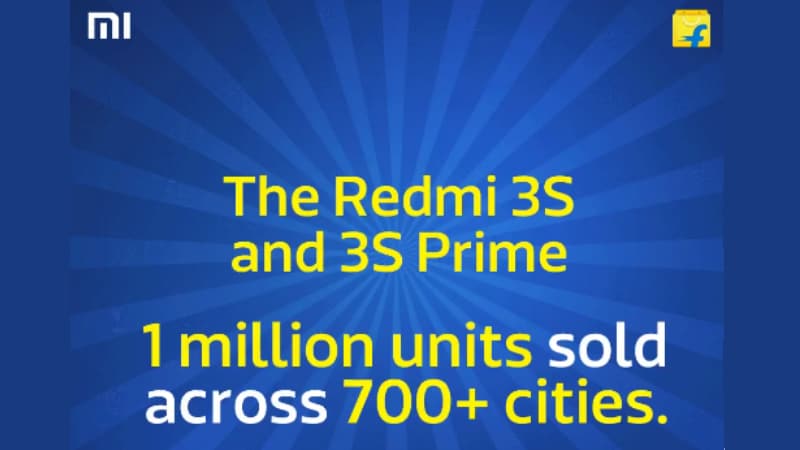 Flipkart has announced that it has managed to sell one million Redmi 3S, Redmi 3S Prime smartphones in India. The smartphone was launched in the country in August this year, and was made available on Mi.com and Flipkart online.

This milestone was tweeted by the e-commerce giant, and it even congratulated Mi India for the feat. Just to recap, the Redmi 3S was first launched in China in June this year, and was then brought to India in August with a price tag of Rs. 6,999. Alongside, the Redmi 3S Prime with 3GB of RAM, 32GB of storage, and a fingerprint sensor was launched at Rs. 8,999. Both smartphones were sold through the open sale model online. Xiaomi has managed to achieve the one million mark on Flipkart in less than four months.

The budget smartphone features a 4100mAh battery and a metal body. The Redmi 3S has a 5-inch HD (720x1280 pixels) IPS display and runs MIUI 7.5 based on Android 6.0 Marshmallow. It packs an octa-core Qualcomm Snapdragon 430 processor with four cores clocked at 1.1GHz, and four other cores at 1.4GHz alongside the Adreno 505 GPU and 2GB of RAM (3GB on the Redmi 3S Prime).

The smartphone offers 16GB of inbuilt storage (32GB on the Redmi 3S Prime) with support for expandable storage via microSD card (up to 128GB). The dual-SIM handsets (Micro + Nano) come with hybrid SIM slots which means the second slot also acts as a microSD slot.

During the Diwali sale, Xiaomi had announced that it had managed to sell half a million smartphones in just three days between October 1 and 3, which it claims is an industry first and milestone for the Chinese smartphone maker. The Redmi 3S (along with Redmi 3S Prime) were also the top-selling product on Flipkart during its Big Billion Days Sale while Redmi Note 3 was the best-selling smartphone of Amazon's Great Indian Festival sale.