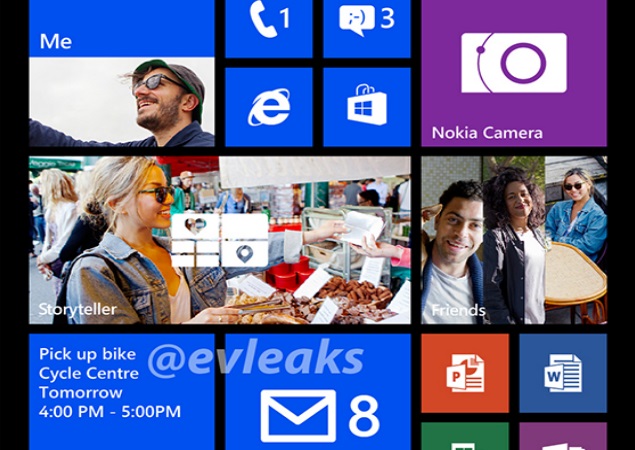 There have been several rumours surrounding Nokia's first phablet device, the Lumia 1520, codenamed Bandit. Now, a new leaked screenshot supposedly from the same phone appears to confirm some of those rumours.

The screenshots have been leaked by the prolific phone leaker, @evleaks and apparently shows the alleged Lumia 1520 device's Start screen complete with a number of live tiles. The images reveal that the yet to be announced phablet would offer extra columns and rows for apps. It appears that the phone will feature a new Storyteller app as its live tile is also seen in the screenshot. However, the image does not offer any details related to the internals of the alleged phablet from the Finnish handset vendor.

There were reports that suggested the Finnish handset manufacturer was testing a 6-inch device running an updated version of Windows Phone 8. It was expected to include a full-HD (1080p) display and a Qualcomm Snapdragon quad-core processor.

The Nokia Lumia 1520 is rumoured to ship with a 20-megapixel rear camera and may borrow the rear panel features of the Nokia Lumia 925 to accommodate the camera.

Previously, @evleaks claimed that Nokia's alleged Bandit phablet will be officially dubbed as the Nokia Lumia 1520.

The leak comes at a time when Microsoft is acquiring Nokia's Devices & Services business in a 5.44 billion euros deal. Nokia has granted Microsoft a 10-year non-exclusive licence to its patents.

Samsung, Apple, Sony or Google: Who has vision to crack the smart watch
The changing fortunes of Finland's Nokia