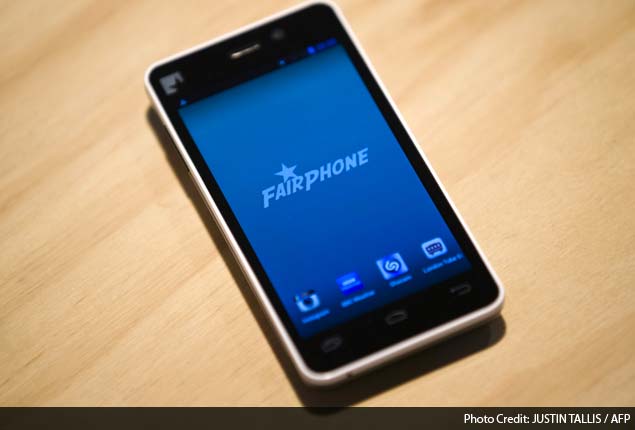 A device billed as the world's first ethically sourced smartphone was unveiled in London this week, but despite thousands of pre-orders its designer says the project remains a huge gamble.

The Dutchman behind the Fairphone says it avoids sourcing materials from conflict zones or using factories with poor labour practices, taking as its model the coffee and banana "fair-trade" industry.

More than 15,000 people have already ordered the new handset, which sells for 325 euros ($440) and is due to start shipping in December, but designer Bas van Abel said ethical business was far from easy.

"The responsibility is enormous," he told AFP at the unveiling of the Fairphone's prototype at the London Design Festival.

"These 15,000 people trust me. If the factory which makes the devices is engulfed by an earthquake, I am going to have to refund them one-by-one.

"When I think about it I can't even sleep or eat."

The Fairphone prototype looks much like its competitors, Apple's iPhone and Samsung's Galaxy, but the designers say there is a world of difference.

Fairphone describes itself as a "social enterprise" that has essentially crowd-sourced its funding from the thousands of people who have ordered the device without ever actually seeing one.

Van Abel, a 36-year-old father-of three, had initially focused on finding a way to ethically obtain coltan, a mineral which is vital for mobile phones whose extraction in the Democratic Republic of Congo feeds one of the deadliest conflicts since World War II.

Realising that cobalt was also used extensively to make handsets, Van Abel quickly broadened his ambition to building a smartphone embodying social and environmental values all along the production chain.

The Fairphone is also designed to be less energy-hungry and more easily recyclable than current smartphones.

It is still manufactured in China, like the iPhone whose maker Apple has faced pressure to better oversee often-poor manufacturing conditions in China since 13 workers for one of its suppliers committed suicide in 2010

But Van Abel says that he is trying to "change the system where it is at its worst".

"If we (take production) to Australia we feel like we're avoiding the real issue," he argued, adding that locating in such a country could also affect the price of the handset.

Fairphone is in talks with several operators including Vodafone and Dutch group KPN, but is reluctant to give away the handsets cheaply or for free as part of a network deal.

"We understand that this represents a lot of money but giving away a phone for free removes all of its value and people don't hesitate to throw it away as soon as there is a slight problem," said Tessa Wernink, Fairphone's director of communications.

"An outsider might see Fairphone as a group of activists claiming the whole industry is rotten, but it is not that at all," he argued.

"We want to be part of the system, not to fight against it, but to change it from the inside."

Apple and Samsung are giants in need of a shake up, he believes.

"Samsung, Apple and all the big players have made so many innovations in the last years that they actually made the existence of Fairphone a possibility," he stressed.

"Fundamentally the big companies are stuck," he explained. "It's not fun for them to read in the newspapers that another Chinese worker has committed suicide in one of your factories.

"They would do something, but the system prohibits them," he stated. "This is why we want to change it."