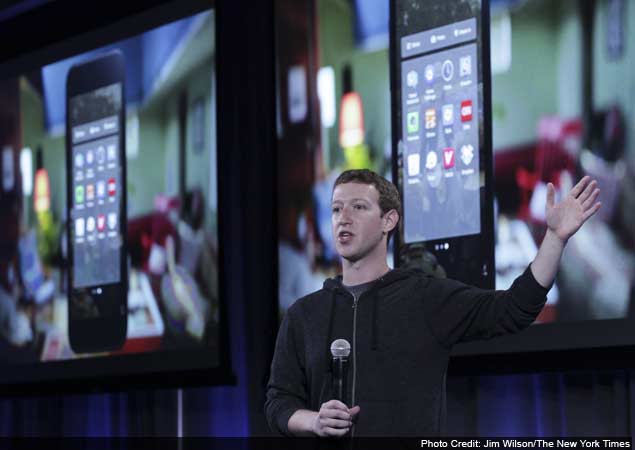 Although Facebook has a powerful presence on personal computers, the cellphone has been its Achilles' heel. With its users flocking to mobile phones by the millions - and many of its newest users never accessing the services on computers at all - the company has struggled to catch up to them.

On Thursday, Facebook unveiled its latest, most ambitious effort to crack the challenge: a package of mobile software called Facebook Home that is designed to draw more users and nudge them to be more active on the social network.

The new suite of applications effectively turns the Facebook news feed into the screen saver of a smartphone, updating it constantly and seamlessly with Facebook posts and messages.

In so doing, Facebook has cleverly, perhaps also dangerously, exploited technology owned by one of its leading rivals, Google. Facebook Home works on Google's Android operating system, which has become the most popular underlying software for smartphones in the world.

The Facebook News Feed appears as soon as the phone is turned on. Pictures take up most of the real estate, with each news feed entry scrolling by like a slide show. Messages and notifications pop up on the home page. To "like" something requires no more than two taps. Facebook apps are within easy reach, making the phone essentially synonymous with the Facebook ecosystem.

"Today, our phones are designed around apps, not people," said Mark Zuckerberg, Facebook's chief executive, said at a news conference here at the company's headquarters. "We want to flip that around."

Facebook Home will be available for download from Google's app store, Play, on April 12 for four popular, moderately priced phones that use Android and are made by HTC and Samsung. A fifth one, a new model called the HTC First, will be sold by AT&T for $100 with the software loaded.

For the time being, Facebook will not show ads on the phone's home screen, which Facebook is calling Cover Feed. Since advertising revenue is crucial to the company's finances, however, it will almost certainly display ads there in the future.

Facebook Home is also clearly designed to get Facebook users to return to their news feeds even more frequently than they do now. Every time they glance at their phone at the supermarket checkout line or on the bus to work, they will, in essence, be looking at their Facebook page.

"It's going to convert idle moments to Facebook moments," said Chris Silva, a mobile industry analyst with the Altimeter Group. "I'm 'liking' things, I'm messaging people, and when ads roll out, I'm interacting with them and letting Facebook monetize me as a user."

Krishna Subramanian, the chief marketing officer at Velti, a San Francisco-based company that buys targeted advertisements online on behalf of brands, pointed out that even without showing ads on the mobile cover feed, Facebook Home could prove to be a lucrative tool.

By nudging its users to do more on the social network, he said, the company will inevitably get "an explosion of mobile data that can be tied back into desktop advertising" to Facebook users.

A majority of Facebook's 1 billion-plus users log in on their cellphones. Most Americans now have an Internet-enabled phone, and smartphone penetration is growing especially fast in emerging market countries, where Facebook has substantial blocs of its users.

At Thursday's press event, Zuckerberg repeatedly signaled that he wanted the new product to enable a mass, global audience to connect to Facebook, especially those have yet to get on the Internet. "We want to build something that's accessible to everyone," he said.

Although HTC is rolling out the first new phone with Facebook Home installed, and AT&T has agreed to sell it, other phone-makers and carriers may be reluctant to load the software.

Jan Dawson, a telecom analyst at Ovum, said Apple's iPhone and many Android smartphones already do a good job of integrating the Facebook application into their phones. And he said phone carriers were unlikely to give a Facebook phone made by HTC much support because the Taiwanese phone-maker's past attempt at a Facebook phone - the ChaCha, which had a physical button for posting photos on Facebook - sold poorly.

"HTC may be desperate enough to do this, but carriers aren't likely to promote it heavily," Dawson said. "As a gimmick, it may bring customers into stores, but they'll mostly end up buying something else."

Whether consumers will embrace a phone that emphasizes Facebook over everything else also remains to be seen. Some are likely to have concerns about how much personal information they are being asked to share with Facebook. Additionally, checking Facebook dozens of times every day could result in hefty data use charges, unless users are connected to a Wi-Fi network or negotiate special packages with carriers.

Facebook and AT&T executives said they had taken that into account. Users will be notified when they are about to reach their data limits. The software can also be set to download data-heavy content like video only when the user is connected to a Wi-Fi network, and then save it in its memory.

The software's most powerful feature is to turn the cellphone into a starkly personal gadget.

Facebook employees, current and past, were invited to the product announcement, a sign of how crucial it has been for Facebook to crack the mobile puzzle. Silicon Valley has whispered for months about the prospects of a Facebook phone. Zuckerberg has consistently denied building one.

Thursday's announcement signaled that Facebook had stopped short of even building an operating system. Instead, it had simply altered its rival Google's technology.

The Android platform, Zuckerberg said, was built to be open to new integrations. Asked at the news conference whether he feared that Google executives would change their mind about Facebook using it to advance its mobile aims, Zuckerberg turned somewhat testy.

"Anything can change in the future," he said. "We think Google takes its commitment to openness very seriously."

Google, for its part, was notably genteel. "This latest collaboration demonstrates the openness and flexibility that has made Android so popular," the company said in an emailed statement. "And it's a win for users who want a customized Facebook experience from Google Play - the heart of the Android ecosystem - along with their favorite Google services like Gmail, Search and Google Maps."