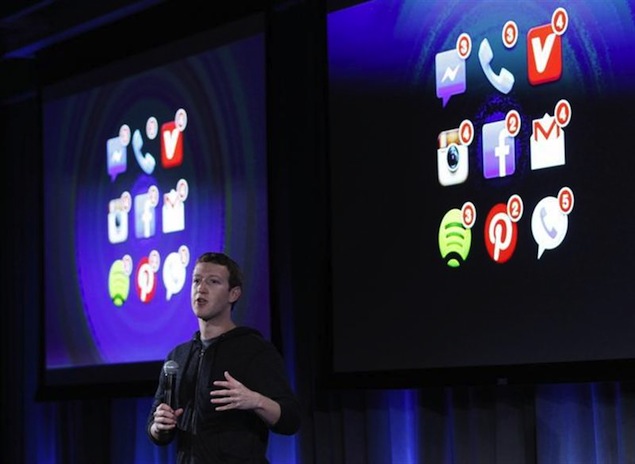 Facebook Inc unveiled "Home" software on Thursday to place the world's social network front and center on Android users' smartphones, a move that may divert users from Google services and steal some of its rival's momentum in the fast-growing mobile arena.

Its new family of apps will let users display mobile versions of their newsfeed and messages prominently on the home screens of a wide range of devices based on Google's Android operating system, CEO Mark Zuckerberg told reporters.

"Why do we need to go into those apps in the first place to see what's going on with those we care about?" Zuckerberg told the hundreds of reporters and industry executives gathered at Facebook's Menlo Park campus.

"We want to bring all this content to the front."

Facebook executives showed a new "chatheads" messaging service and "coverfeed" -- both of which dominate users' home screens and continuously feed messages, photos, status updates and other content from Facebook's network.

"Home" brings the competition between the two Web superpowers to the mobile front, which is becoming many consumers' primary conduit to the Internet. Facebook, the world's largest social network, and Google, the dominant Internet search engine, are locked in battle for Internet users' time online and for advertising dollars.

For Facebook, bolstering its mobile presence is critical. Nearly 70 percent of Facebook members used mobile devices such as smartphones and tablets to access its service at the end of 2012, and 157 million of Facebook's roughly 1 billion users accessed the service solely on a mobile device.

The company has stepped up efforts to ensure that its revenue-generating ads can be viewed on mobile devices and Zuckerberg has said that the company's engineers are now focused on creating "mobile-first experiences."

Reports that Facebook was developing its own smartphone have sporadically appeared for years though Zuckerberg has shot them one down, saying that building a Facebook phone would be "the wrong strategy."

With specialized software that adds a layer on top of Android, Facebook may get many of the benefits of having its own phone without the costs and risks of actually building a hardware device.


Edited by NDTV Staff from original story by Reuters
Comments