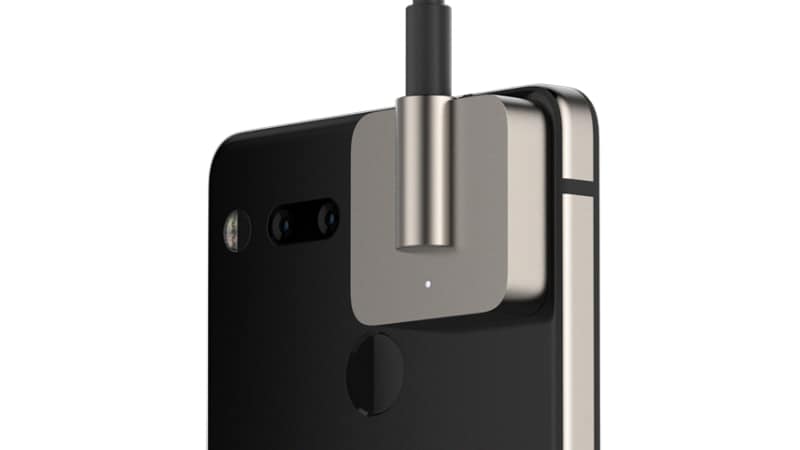 A long time after its formal launch, Essential Phone has finally received a useful attachment module that brings connectivity with headphones and speakers requiring a 3.5mm audio jack. The new module, called Audio Adapter HD, fulfils the absence of a built-in 3.5mm jack by working as a magnetic 3.5mm headphone jack dongle. The price of the new accessory hasn't been announced formally. However, the company promises that it will debut sometime later this summer. The latest development notably comes amid Essential Phone maker Essential Products reportedly started exploring its sale.

The Audio Adapter HD for the Essential Phone includes a high-resolution ESS Sabre DAC that is touted to deliver an unparalleled master quality audio performance. There is also an audiophile-grade amp that the company supports high impedance headphones with low distortion. The build of the new magnetic module is designed with machined titanium. Further, it uses the proprietary Click connect interface that uses magnets and a pogo pin connector to establish connectivity with accessories.

Last month, multiple reports claimed that Essential Products is considering its sale and has cancelled development of a new smartphone. A Bloomberg report, citing people familiar with the development, said that the company led by Android creator Andy Rubin had hired Credit Suisse Group AG to explore different sale options.

Essential Products launched the Essential Phone as its first smartphone back in May 2017. The smartphone features an almost edge-to-edge display with a small notch on top and two magnetic pogo pins at the back for modular attachments. At the time of its launch, the Palo Alto, California-based company brought a 360-degree camera module that sits on the back of the handset to enable 360-degree video recording. The camera module is available at $199 (approximately Rs. 13,500), while the Essential Phone itself comes at $499 (roughly Rs. 33,800), discounted from the original launched price of $699 (Rs. 47,400).