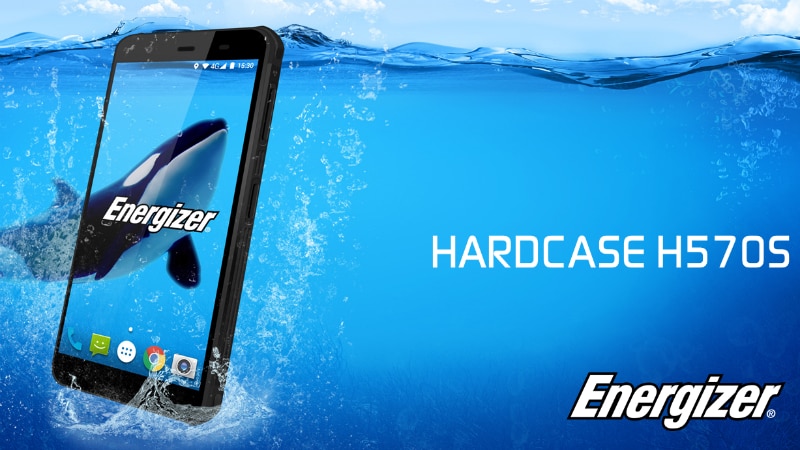 Avenir Telecom licensed smartphone brand Energizer Mobiles has announced the launch of the latest Hardcase H570S in France. This is the company's first rugged smartphone that comes with IP68 dust and water resistance. The phone is said to withstand a fall of up to 1.2 metres and can stay under water up to 1.5 meters for 30 minutes at a stretch. The phone has a large 4800mAh battery and is expected to be made available in Q2 2018. Pricing details are currently not available.

The dual SIM Hardcase H570S runs Android 8.0 Oreo out-of-the-box. It sports a 5.7-inch full-HD+ (1080x2160 pixels) display with an 18:9 aspect ratio and Corning Gorilla Glass 3 protection. The phone is powered by a quad-core MediaTek Helio P18 SoC, paired with 3GB of RAM and 32GB inbuilt storage. Storage is expandable via microSD card (up to 128GB).

In terms of camera specifications, the Hardcase H570S bears a 13-megapixel primary sensor and a 0.3-megapixel secondary sensor on the back, and dual 8-megapixel sensors on the front. There is a large 4800mAh battery, with 12V fast charge and Intelligent Power Saving technology, powering the internals from under the hood.

Connectivity options on the handset include 4G VoLTE, NFC, and USB Type-C. Sensors include gyroscope, compass, accelerometer, and fingerprint sensor (up to 5 fingerprints).

Energizer Mobiles recently announced the launch of several new smartphones during Mobile World Congress 2018 in Barcelona. These include the Power Max 16K Pro with a 16000mAh battery, Power Max P490S with a 4000mAh battery, and the Hardcase 590S with a 5800mAh battery.