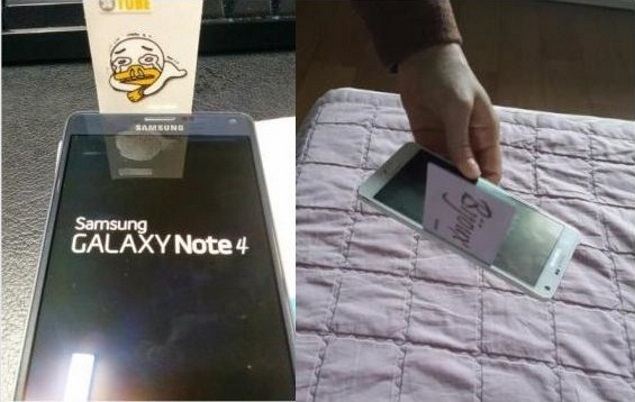 The company's move to launch the Samsung Galaxy Note 4 is seen as an attempt beat the 'bigger' iPhone 6 and iPhone 6 Plus to market in these countries.

However, it seems the launch has not been an ideal one for Samsung, as some Galaxy Note 4 buyers in South Korea are complaining of a manufacturing defect in the handset.

(Also see: Samsung Galaxy Note 4 to Launch in the US on October 17)

GforGames, citing a Korean site, claims that some Galaxy Note 4 users have been complaining of a gap between the phone's screen and the metal casing. Reportedly, the gap seen on some Galaxy Note 4 units can fit up to two A4 size sheets or even a business card. One of the users have also shared an image that shows gap on the top of the screen and also on one of the sides.

The Korean report further suggests that Samsung is aware of the manufacturing defect on the new Galaxy Note smartphone and the necessary changes are expected to be made before the Galaxy Note 4 is globally released in about 140 countries by end of October.

As of now, there is no official word on whether Samsung will replace these defective units. Interestingly, the Galaxy Note 4 manufacturing defect news comes at a time when Samsung's most prominent competitor, Apple, has been facing claims that its new 'bigger' iPhone 6 Plus can be bent easily.

Apple had to defend its iPhone 6 Plus on the bending issue, claiming it wouldn't happen during normal use and that only 9 users had reported the problem. The company even invited journalists to observe its testing procedures.

Coming back to the Galaxy Note 4, Samsung's new Galaxy Note series handset is likely to be released in India next month. A report even claimed that the company might sell the Galaxy Note 4 alongside premium Galaxy Alpha via offline retailers, citing excessive pressure from brick-and-mortar retailers.