ColorOS 11 offers a personalised experience through themes and the ability to change the Always-On Display design. 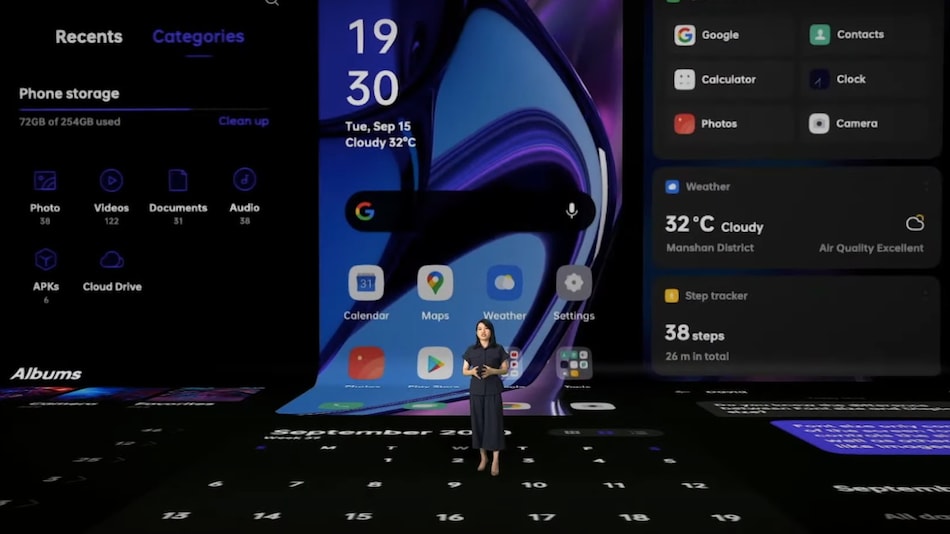 ColorOS 11 has been unveiled as one of the early custom skins based on Google's Android 11 operating system. The new iteration of Oppo's ColorOS maintains a balance between stock Android features and proprietary interface elements to provide users with a feel of both worlds, Oppo says. A major change that ColorOS 11 brings on top of Android 11 is the enhanced Always-On Display feature that lets users create their own designs for the ambient display. The latest ColorOS update also includes an upgraded Dark Mode as well as a series of performance enhancements.

ColorOS 11 allows users to create their own fonts, icons, and ringtones. It also provides a personalised experience through themes and the ability to change the Always-On Display design with various styles and patterns. Further, there is Oppo Relax 2.0 that gives a way to create a white noise mix by using different sounds of local markets, oceans crashing, and bird chirping.

Oppo has also worked with Google to develop a three-finger translate feature, which is powered by Google Lens. This lets you translate the content in your preferred language simply by taking a screenshot using a three-finger gesture.

Dark Mode on ColorOS 11 has also been upgraded with three distinct colour schemes and multiple levels of contrast. The new skin also includes a FlexDrop feature that lets you resize the app into a small floating window or smaller mini-window by a swiping gesture.

ColorOS 11 additionally comes preloaded with a new Super Power Mode that is touted to provide a standby time of 12 hours or talk time of one hour with just five percent battery. There is also a Battery Guard feature that is claimed to help protect the battery from prolonged charging at unstable power voltages. The feature pauses charging once the battery reaches 80 percent at night, before resuming to achieve a full charge by the time users wake up. Further, specifically for Indian users, the latest ColorOS version brings a Low Battery Message feature that allows you to send messages to your selected contacts when the phone battery drops to 15 percent.

For performance improvements, ColorOS 11 comes with UI First 2.0 that combines Oppo's proprietary lag-reducing engine with Quantum Animation. This helps boost RAM utilisation by 45 percent, improving the response rate by 32 percent and the frame rate by 17 percent, according to Oppo. The custom skin also includes an AI App Preloading feature that is touted to use artificial intelligence (AI) algorithms to learn user behaviour and preload the most-used apps. This helps reduce loading time of your favourite apps. However, it is unclear whether the feature is limited to certain apps, or if it can work with any of the installed apps.

ColorOS 11 also has a SuperTouch feature that optimises the touch response speed by identifying user scenarios and improves the overall system fluency. There is also a new shortcut to App Lock to lock apps through a password, fingerprint, or facial verification.

ColorOS 11 beta version based on Android 11 is initially launching for the Oppo Find X2, Find X2 Pro, Find X2 Pro Automobili Lamborghini Edition. The company has already kicked off the beta programme for the Find X2 series in India as well as Cambodia, Egypt, Philippines, Thailand, and Vietnam. The rollout is limited for a batch of 5,000 users and is likely to bring a list of bugs. Thus, it is recommended to go with the beta update on a secondary device.

You can participate in the ColorOS 11 beta programme by going to Settings > Software Update and then tapping the gear icon. You'll then see the Beta Version option from where you can fill in your details and apply for the programme.

Details about the stable ColorOS 11 update for the Oppo phones are yet to be revealed.

Amazon to Hire 100,000 More Workers in the US in Its Latest Job Spree This Year