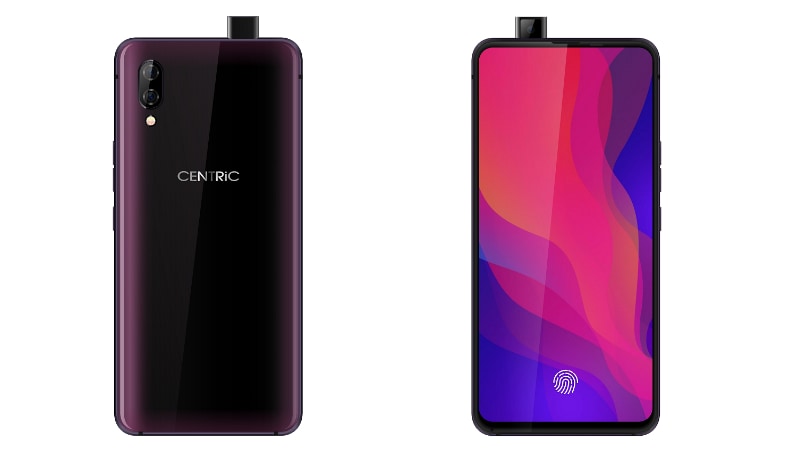 Centric S1 was launched at Mobile World Congress (MWC) 2019 in Barcelona as the company's first pop-up selfie camera phone. The new phone also comes with an in-display fingerprint sensor and a Face Unlock feature. Also, the Centric S1 comes with fast charging support through Pump Express 3.0 that is touted to charge the handset up to 50 percent in 20 minutes. There is also an AMOLED display panel with 700 nits of brightness and wireless charging support. Alongside the Centric S1 flagship, the Indian smartphone vendor brought the Centric L4, Centric A2, Centric G5, and Centric G3 phone models at the ongoing MWC.

All five Centric phones will go on sale in India in June. The India price details of the new models are yet to be revealed, though.

The Centric S1 runs Android 9.0 Pie out-of-the-box and features a 6.39-inch full-HD+ AMOLED display along with a 92 percent screen-to-body ratio and a 19.5:9 aspect ratio. The display panel is claimed to deliver 700 nits of brightness. Also, the phone is powered by an octa-core MediaTek Helio P70 SoC, paired with 4GB and 6GB RAM options.

On the optics front, the Centric S1 sports a dual rear camera setup along with a 16-megapixel primary sensor and a 5-megapixel secondary sensor -- coupled with an LED flash. There is also an 8-megapixel sensor featured on the pop-up selfie camera module. This makes the Centric S1 sit against the Vivo V15 Pro and Vivo Nex that both have a similar pop-up selfie camera module but with different camera sensors.

The Centric S1 has 64GB and 128GB of onboard storage options. Besides, the phone packs a 3,080mAh battery that supports fast charging via Pump Express 3.0 and works with wireless charging functionality.

The Centric A2 that is also based on Android Pie, on the other hand, has a 5.86-inch HD display along with a 19:9 aspect ratio and a display notch design as well as a dual rear camera setup including a 13-megapixel and 5-megapixel sensor combination. There is also an 8-megapixel selfie camera and an octa-core MediaTek Helio P22 SoC, paired 3GB of RAM and 32GB of internal storage. The phone packs a 3,400mAh battery.

In contrast, the Android Pie-powered Centric G5 has a 6.21-inch HD display along with a 19:9 waterdrop-style display notch and a dual rear camera setup -- comprising 13-megapixel and 2-megapixel camera sensors along with an autofocus lens. The phone sports an 8-megapixel selfie camera. It is powered by an octa-core MediaTek Helio P22 SoC, coupled with 3GB RAM and 32GB internal storage, and packs a 4,050mAh battery. Besides, it comes with a facial recognition-supported "Face ID" feature.

The Centric G3 also runs Android Pie but comes with a 6.23-inch full-HD+ display that has a 20:9 aspect ratio, along with a display notch design. The phone is powered by an octa-core MediaTek Helio P60 SoC, coupled with 4GB RAM and 64GB onboard storage. It has a dual rear camera setup with a combination of 12-megapixel and 5-megapixel sensors and an 8-megapixel selfie camera. The phone packs a 3,080mAh battery and has a 7.7mm of width.

All the new Centric phones have a fingerprint sensor, though as we mentioned, the Centric G5 additionally has the Face ID feature.

"The resounding success of Centric's launch event at MWC 2019 is a promising step in the right direction to foray into the global market with our product offerings," said Manish Agrawal, Managing Director, Centric Smartphones, in a press statement.