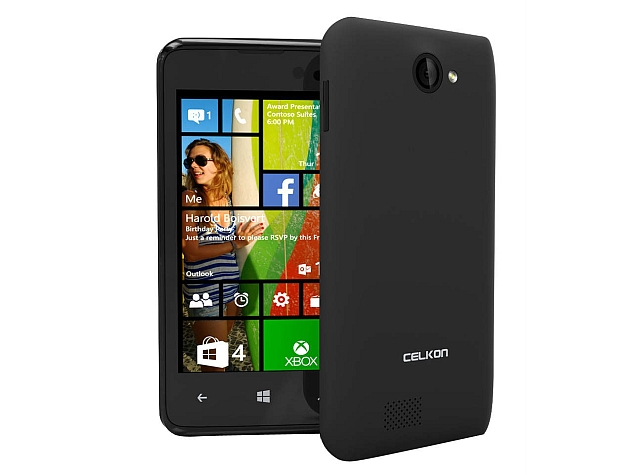 Celkon, almost a week after listing its first Windows Phone 8.1 OS-based smartphone on the website, has announced the Win 400 officially at an event in Hyderabad at Rs. 4,979. Notably, the handset went on sale last week via an e-commerce website at Rs. 4,999 (at the time of writing, the listed price was Rs. 4,977).

The Celkon Win 400 is a dual-SIM (GSM+GSM) device and the first smartphone in the company's lineup to run Windows Phone 8.1. The Celkon Win 400 features a 4-inch HD (480x800 pixels) IPS display, and is powered by a 1.3GHz quad-core Qualcomm Snapdragon 200 (MSM8212) alongside 512MB of RAM. It sports a 5-megapixel rear camera with LED flash, while it also houses a 1.3-megapixel front-facing camera. The smartphone includes 4GB of inbuilt storage which is further expandable via microSD card (up to 32GB).

The smartphone is available in Black and White colour variants only. The smartphone measures 125.4x65x10.3mm and weighs 121 grams. It packs a 1500mAh battery which is rated to deliver up to 5 hours of talk time and up to 200 hours of standby time. The Celkon Win 400 comes with GPRS/ EDGE, 3G, Wi-Fi, Bluetooth, GPS and Micro-USB connectivity options.

Considering the official price tag for the smartphone, the Celkon Win 400 is arguably India's cheapest smartphone with Windows Phone 8.1 - leaving behind Karbonn's Titanium Wind W4 which is retailing in the Indian market at Rs. 5,999.

By launching the Win 400, Celkon has joined domestic handset makers such as Karbonn, Micromax, and Xolo, who have already launched their Windows Phone handsets in the market.

"We are happy to announce our association with Microsoft and Qualcomm, a new milestone for Celkon. We have many more exciting offerings lined up in the coming year as well which will stand true to our proposition of being innovative and yet, affordable," stated Y Guru, Chairman and MD Celkon Mobiles at the launch.

"I congratulate Celkon Mobiles on the launch of their first Windows Phone today - the Celkon Win 400. Our deep engagement with local OEMs is one of the engines of growth for the Windows ecosystem and we are proud of our partnership with Celkon with Celkon's Win 400, Windows is now available to a whole new group of consumers in India, who are looking for innovation and value," added Rajiv Ahlawat, Director Mobility, Microsoft India.