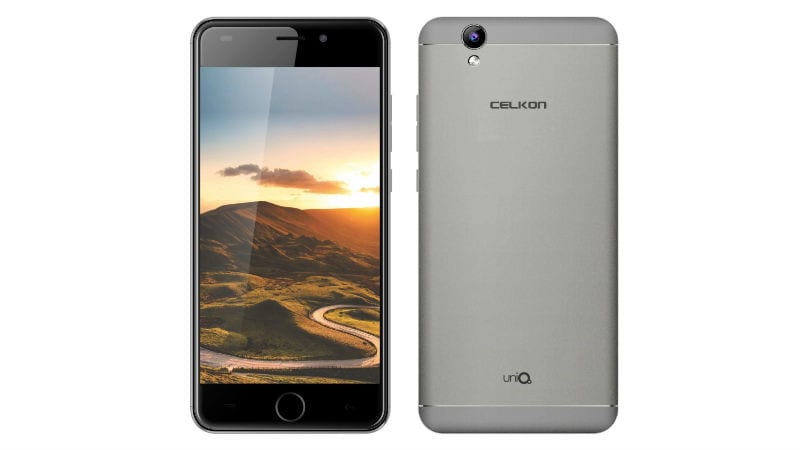 Celkon Mobiles has launched the Celkon UniQ in India with a price tag of Rs. 7,999. Taking on options such as the Tecno Camon i, Moto E4 Plus, and Samsung Galaxy J3 Pro, the new smartphone flaunts a metal body and a fast front-facing fingerprint sensor. Exact availability details haven't been disclosed yet.

The dual-SIM Celkon UniQ runs Android 7.0 Nougat and features a 5-inch HD (720x1280 pixels) IPS display and 2.5D curved glass protection. It is powered by a 1.3GHz quad-core SoC, coupled with 3GB of RAM. On the part of optics, the handset has a 16-megapixel rear camera sensor along with an LED flash and an 8-megapixel front camera sensor with a "Moonlight" flash.

For storing content, the Celkon UniQ has 128GB of onboard storage that is expandable via microSD card (up to 128GB), which is supported by a dedicated slot. The smartphone has 4G, Wi-Fi, Bluetooth, GPS/ A-GPS, and Micro-USB. Besides, it packs a 2700mAh battery.

Late last year, Celkon Mobiles partnered with Airtel to offer the Celkon Star 4G+ at an 'effective price' of Rs. 1,249, though the market price of the smartphone is approximately Rs. 2,999. The partnership was aimed to expand Airtel's 'Mera Pehla Smartphone' initiative that was aimed to make smartphones affordable for the masses. Customers opting for the Celkon Star 4G+ under the tie-up need to pay a down payment of Rs. 2,749 and make 36 continuous monthly recharges (totaling a minimum of Rs. 3,000 every 18 months). In return, Airtel will provide them with a cashback of Rs. 500 after 18 months, while the remaining Rs. 1,000 will be available after 36 months - bringing the total cashback to Rs. 1,500.

Celkon Mobiles also broadened the reach of its Android-based Flo OS last year by launching the Celkon CliQ. The smartphone came with a 5-inch HD display and a quad-core 64-bit Cortex A53 processor, paired with 2GB of RAM. It had a 16-megapixel rear camera sensor and an 8-megapixel front camera sensor. Further, it packed a 2500mAh battery and came with a price tag of Rs. 8,399. The smartphone was debuted with preloaded SwiftKey keyboard app and supported 24 Indian languages.