Buyers send iPhones on a long relay to China 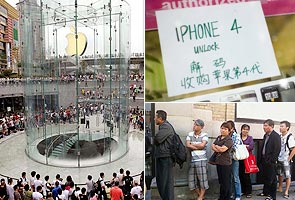 Highlights
They show up in the early-morning hours: Chinese men and women, waiting silently and somewhat nervously outside of Apple stores in New York. On some days the lines they form can be a block long.

These are not typical Apple fans. Instead they are participants in a complex and curious trade driven by China's demand for Apple's fashionable gadgets -- products that are made in China in the first place and exported, only to make the long trip back.

Participants in New York and Shanghai say the process works like this: People wait in line at an Apple store to buy the newest iPhone for $600, paying a premium to skip the AT&T contract. They then sell the phones to middlemen, usually at electronics stores in Chinatown, for about $750.

The phones are shipped off to China, where the iPhone 4 is not yet on sale, and are distributed to local shops and e-commerce sites, where they sell for as much as $1,000. Once the phones have been "unlocked" to break their ties to AT&T, they can be used with local carriers.

But a change to this practice is coming. On Saturday, the iPhone 4 will go on sale in China, priced at about $750 for the 16-gigabyte version.

Most people in China can only dream of being able to afford an expensive phone. But millions of Chinese are developing a taste for luxury goods, and Apple products have joined Louis Vuitton bags as totems of wealth, said Shang-Jin Wei, director of the Jerome A. Chazen Institute of International Business at Columbia Business School.

"These trading networks have been around for a long time," Professor Wei said. "They have recently become a lot more pervasive due to rising incomes in China -- partially as a result of exports to the U.S."

An Apple spokesman would not discuss the systematic iPhone purchases at Apple stores, but the company has tried to put a stop to them -- and has found it difficult to do so.

In June, the company came under fire in New York State for refusing to sell the iPhone 4 to some Asian customers. Andrew M. Cuomo, the New York attorney general, opened an investigation into the matter, and Apple apparently backed off.

Those waiting in line in New York were not eager to talk about their mission or to identify themselves. When asked what they are doing, the stock answer was always the same: "I'm buying the iPhone for a friend." Some buy a phone, conceal it in a bag and go back into the store to buy another. A man who was asked what the second phone was for explained: "I have two friends."

Apple limits purchases to two iPhones a person, and to discourage repeat visits it keeps a record of credit cards used, though cash purchases are not tracked. Apple says the limit "helps us ensure that there are enough iPhones for people who are shopping for themselves or buying a gift."

The iPhone 4 went on sale in the United States in June, but it is still in such demand that many stores quickly sell out of new shipments.

The buy-and-export scheme is not limited to New York. There have been anecdotal reports of similar efforts elsewhere. Kate Peters of Durham, N.C., said she was visiting an Apple store in a mall there last month when she saw "an Asian woman with a group of college-age
Chinese men," perhaps eight of them. They all bought iPhones and iPads, paying with $100 bills, though they seemed unfamiliar with the currency, Ms. Peters said.

The iPhone trade appears to be widely known in New York's Chinese community. An older Chinese man sitting on a stoop in the Sunset Park neighborhood of Brooklyn, who said he worked seven days a week as a cook, said the opportunity was too enticing for low-income immigrants to pass up.

"Many workers make a few dollars an hour working in restaurants or factories," he said. "If they wait in line for an hour at the Apple store to buy and sell phones, they can make $300 in a single morning." For many, he said, this is equivalent to an average week's pay.

iPhone sellers in China say the phones are often brought into the country by people who hide them in their bags or even tape them to their bodies. More organized smugglers will bring in 100 or more iPhones a day, and some will put phones into a shipping container with other goods.

"It's all about connections and channels," said one seller at the Sleepless Mall, a big electronics market in Shanghai where wholesalers distribute phones to sellers in small stalls. "Once you have good relationships with customs and airline companies, you can ship whatever products you like. We smuggle it both by air and by boat."

The buyers are willing to admit that the phone's allure has a lot to do with the status it conveys. A 26-year-old woman in Shanghai who works for a media company said she had waited several weeks to get the iPhone 4, explaining that "Apple is a sign of coolness."

A college freshman at the Sleepless Mall said he had tried to order an iPhone from Hong Kong, then bought one at the mall. "Since there are very few people using it, it's so cool to have one," he said.


But on Saturday, when the iPhone goes on sale in China, it will have ripple effects abroad. This is already pushing down prices of smuggled phones.

Professor Wei said the legitimate sales would cut into the smugglers' profits but would not wipe them out. He said every aspect of the pricing and availability of the iPhone in China had been calculated to make it a highly sought product.

"Apple knows exactly how much these products are selling for on the black market in China, and the company will price its products accordingly," Professor Wei said. "Limiting the sale of the iPhone until now in China is likely part of a bigger corporate strategy to make it a luxury product that people will pay higher prices for."

If that is Apple's strategy, it has had some unexpected side effects. The scrutiny that Apple store employees have given to Asian customers in New York has led some to complain of discrimination.

Grace Meng, a New York State assemblywoman whose district in Queens includes the Flushing neighborhood, said some of her constituents had approached her office after being told they could not buy the iPhone 4.

"I don't deny that there is a serious concern that Apple has," Ms. Meng said. "We just want to make sure that no one is singled out because of their ethnicity or because they don't speak perfect English."

Ms. Meng forwarded the complaints to the attorney general's office, where a spokesman, John Milgrim, said the inquiry "remains an ongoing investigation."

Zuckerberg gives $100 million gift to Newark schools
Was the Twitter hack made in Japan?