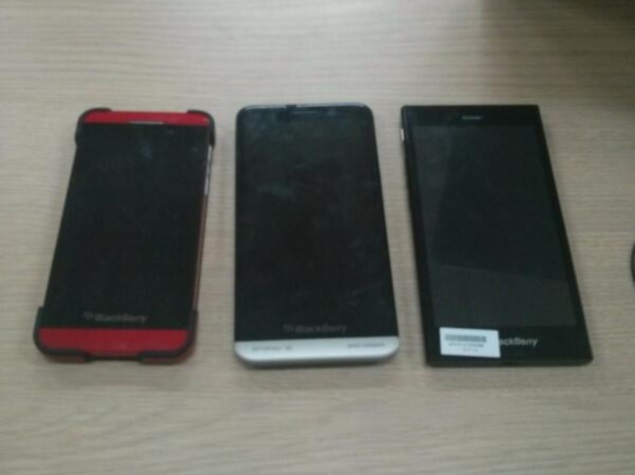 BlackBerry announced the Z3 touchscreen smartphone, alongside a Classic model with a keyboard, the Q20 at the sidelines of MWC 2014. The company; however is yet to reveal the design and innards of the Z3 smartphone.

Now, thanks to a purported leaked image of the BlackBerry Z3, we might have the first glimpse of the smartphone. The image has been posted by an Indonesian publication and shows the BlackBerry Z3 pictured alongside the Z10 and Z30. The leaked image suggests that the Z3 will feature slim bezels and might come with a 5-inch display, much like company's first phablet, the BlackBerry Z30.

Further, considering that the BlackBerry Z3 will be priced below $200, the display resolution is expected to be qHD (540x960 pixels). As of now, there is no word on other specifications of the BlackBerry Z3.

Notably, the Z3 smartphone, which the company had already announced will be priced at under $200, has been built under a partnership deal with FIH Mobile Ltd - the Hong Kong-listed unit of Taiwanese electronics giant, Foxconn. The BlackBerry Z3 smartphone was announced to be initially available in Indonesia by the end of April.

Earlier, BlackBerry's chief executive John Chen indicated that the company has plans to introduce multiple QWERTY phones in next 18 months. Chen said "The focus is going to be very keyboard centric."

Not too long ago, BlackBerry, to celebrate its 10th anniversary in India announced a limited period offer for its BlackBerry Z30 smartphone, pricing it at Rs. 34,990.

BlackBerry's John Chen, recently reaffirmed the company's plan for Windows Phone smartphones and confirmed that the BBM app would be released by second quarter (May or June) this year.