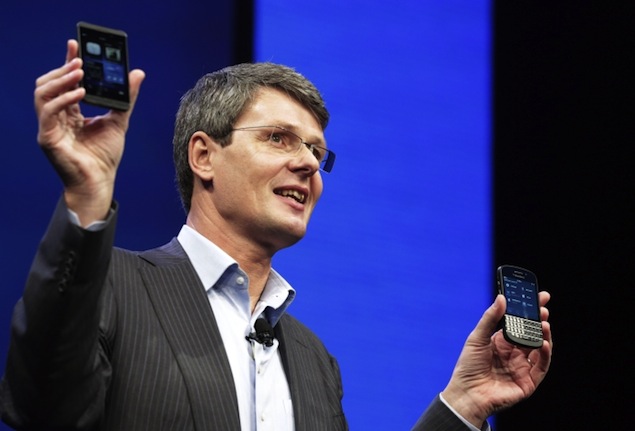 BlackBerry no longer owns the fast-paced, innovative smartphone world but the company, whose email-on-your-hip devices once revolutionised the industry, now aims to run it.

The change in focus was hard to miss at the company's well-attended annual conference in Florida last week, even as news of a new smartphone model and its plans to offer the popular BlackBerry Messaging (BBM) instant message service on other platforms grabbed the headlines.

The company, whose BlackBerry Enterprise Service (BES) offering has long allowed customers to manage BlackBerry devices within corporate or government networks, is now extending that feature to let customers manage non-BlackBerry devices. It is also providing security for data regardless of what devices the customers use.

"The most exciting announcement they made is their strategy to provide secure infrastructure across devices and secure iOS and Android devices in addition to BlackBerry devices," said Yaacov Cohen, who heads Harmon.ie, a company that gives users access to corporate collaboration tools such as IBM Connections and Microsoft Office 365 across a range of operating systems.

Although the move has long been anticipated, the official launch of BES 10.1 paves the way for enterprise customers to begin upgrades in the latter half of the year, a development that might also boost sales for the company's new line of Blackberry 10 smartphones.

Because it routes data through proprietary networks rather than open channels, BlackBerry has long been known among government agencies and corporations for its strong security features. Its new one-stop solution keeps it relevant for those customers even as rivals like Apple Inc and Samsung Electronics look to make inroads in the domain.

"I look at BlackBerry as a provider of infrastructure for mobile computing," Cohen said. "When you look at things from this angle, given the huge need for secure infrastructure, then the position of BlackBerry can be one of total leadership, something similar to what Microsoft achieved during the switch to personal computing."

Mobile computing future
At the BlackBerry Live conference in Florida, the company also laid out a bold vision for the BlackBerry 10 operating system that powers its new line of devices.

"BlackBerry understands mobile better than anyone else. It's in our DNA," Chief Executive Thorsten Heins told the 5,000 or so delegates.

"We live and breathe mobile and BlackBerry 10 as a platform is built for mobile. We're committed to making BlackBerry 10 the mobile platform that will take the industry into the new era of mobile computing."

The success of this plan, though, depends largely on how well BlackBerry's new line of devices are received. Reports on sales of the new phones, led by the touchscreen Z10, have so far been mixed with some analysts pointing to strong sales in the United Kingdom, Canada, and the Middle East, while others point to a tepid response in the United States. BlackBerry itself has set its sights on its platform being No. 3 in the market.

Cohen sees this goal, along with the company's vision on mobile computing, as being realistic as more and more processing power gets built into smartphones.

"We are toward the end of the personal computing era and we are entering the mobile computing era," he said. "BlackBerry has an amazing opportunity to actually take a lead role."

The company has already shown how its BB10 software, whose QNX core already runs machines as complex as nuclear reactors, can run mapping, entertainment and other functions in cars.

Enterprise buying in
Although BlackBerry faces an uphill battle winning consumers over to its smartphones, companies and government agencies are already installing the BlackBerry Enterprise Service they need to run BB10 devices, and developing applications to run on the platform.

The New York City Department of Information Technology and Telecommunications last week confirmed it intends to deploy some 2,000 BlackBerry 10 smartphones by this summer, while one of Canada's top banks, BMO Financial Group , endorsed BlackBerry 10 as its platform of choice.

"We've got 12,000 plus BES 10 servers already installed and the curve is starting to ramp up and accelerate," said Scott Totzke, BlackBerry's senior vice president of security.

Some large banks, law firms and other clients are rapidly deploying the system, said Brian Reed, chief marketing officer of BoxTone, a firm that helps centralize the IT needs of large enterprise clients.

BoxTone, which works with BlackBerry and device management players such as Good Technology, said 90 percent of the roughly 100 of its clients who attended the Florida event had either installed or were testing BlackBerry's new BES 10 servers.

"BlackBerry is kind of the standard for mobile security and it is viable in the enterprise space," Reed said. "I think they are in a great place right now."