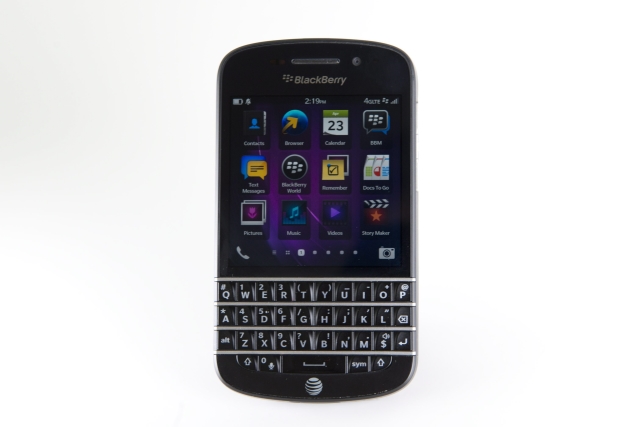 BlackBerry's new Q10 smartphone, which comes with the physical keyboard that many BlackBerry fans prize, is selling well in both Canada and Britain, an industry analyst said on Friday.

The company introduced the Q10 (Review I Pictures), its second smartphone to run the new BlackBerry 10 operating system (Review), in Canada and Britain this week.

"Our checks indicate broad sellouts with generally limited stock otherwise," Jefferies analyst Peter Misek said in a note to clients on Friday. "Based on our store checks, the BlackBerry Q10 has been selling extremely well and has been sold out or seeing limited availability in Toronto and across the U.K."

Jefferies, which has a "buy" rating on shares of BlackBerry, said its findings were based on checks with top mobile carriers and retailers in both countries, including Bell, Rogers and Telus in Canada, and Carphone Warehouse, Vodafone, and Orange in Britain.

BlackBerry hopes its new line of smartphones, led by the touchscreen Z10 (Review I Pictures) device it introduced earlier this year, will help claw back market share lost to the likes of Apple Inc's iPhone and Samsung Electronics Co's wildly popular line of Galaxy devices, which are powered by Google Inc's Android operating system.

Shares of BlackBerry were up 2.2 percent at $16.04 in early trading in the United States on Friday, while its Toronto-listed shares were up 2.8 percent at C$16.21.

Pentagon clearance
The Jefferies report came a day after the Pentagon gave the BlackBerry 10 devices, along with Samsung's mobile devices, security clearance for use on U.S. defense department networks.

Earlier this week, the Pentagon said it also plans to clear Apple mobile devices that use the iOS 6 system at some point in early May.

The move is expected to set the stage for a tough fight over defense department orders among Apple, Samsung and BlackBerry. BlackBerry devices have so far dominated the segment.

The Pentagon said its move to open up its networks to a broad array of mobile devices is part of an effort to ensure the military has access to the latest communications technology without locking itself in to a particular equipment vendor.

That said, the Pentagon's stamp of approval was crucial for BlackBerry as it makes it easier for the company to market the devices to other security-conscious government, legal and financial industry clients.

Last week, international law firm Clifford Chance announced that it would roll out roughly 1,600 BlackBerry 10 smartphones to its employees.

Earlier in April, Canadian Tire Corp, which owns a wide range of retail outlets across Canada, said it planned to roll out the new BlackBerry devices to its corporate team across the country.

Security solutions
Waterloo, Ontario-based BlackBerry reiterated on Thursday that it plans soon to extend its security capabilities to devices powered by both Apple's iOS software and Google's market-leading Android software.

BlackBerry said in March it planned to offer a service that will separate and secure work and personal data on iOS and Android. The offering is an attempt to encourage large government and corporate customers to continue to use BlackBerry's services to manage mobile devices on their networks at a time when a growing number of people seek to use their personal devices on corporate networks.

The company said testing of the new offering, dubbed "Secure Work Space", has already started and that it will be generally available by the end of June.

The service, powered by the company's mobile device management (MDM) tool BlackBerry Enterprise Service 10 (BES 10), will help secure data stored on devices as well as data that is being transmitted to a device.

Misek said he believes that BlackBerry's device management offering is under appreciated and that BES 10 is being widely tested by corporations.

"We think BlackBerry's MDM software will gain traction throughout this year and see a significant ramp in revenues next year," Misek said in his note to clients.