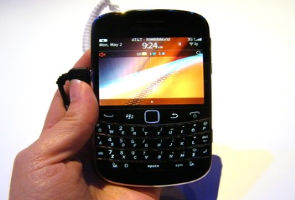 Highlights
BlackBerry services buzzed back to life across the world Thursday, after a three-day outage that interrupted email messages and Internet services for millions of customers.

Research In Motion Ltd., the maker of the phones, said the system was back to normal early Thursday East Coast time. The company was flushing through stalled messages in the morning.

Some phones that have been out of touch for a long time may need to have their batteries pulled out and put back in to regain a connection to the network, co-CEO Mike Lazaridis said on a conference call.

A crucial link in BlackBerry's European network failed Monday, and a backup also failed. That immediately cut off service for most users in Europe, the Middle East, Africa, India, Chile, Brazil and Argentina.

Although the underlying issues were quickly repaired, the system had built up a backlog of emails and messages that needed to be wound down. Meanwhile, messages destined for the affected countries were piling up at BlackBerry data centers in the rest of world, slowing service everywhere. By Wednesday, the outage had spread to the U.S. and Canada.

Lazaridis and co-CEO Jim Balsillie said they had not made plans yet to compensate customers, but they are turning their attention to the question.

"That is something we plan to come back to these customers on very soon. ... Our priority right up until this moment (has been) making sure the system's up and running," Balsillie said.

"We're going to fully commit to win that trust back."

BlackBerry users don't pay the company directly for its email and messaging services. Instead, the phone companies pay RIM on behalf of their subscribers. Balsillie said carriers haven't asked for compensation yet.

"This has not been about pointing fingers," he said. "This has been about serving customers."
RIM shares were down 58 cents, or 2.4 percent, at $23.28 in morning trading in New York. Investors have taken the outage in stride, figuring that it's only one of many problems RIM is facing. The shares are down less than 1 percent since the outage began.
Comments