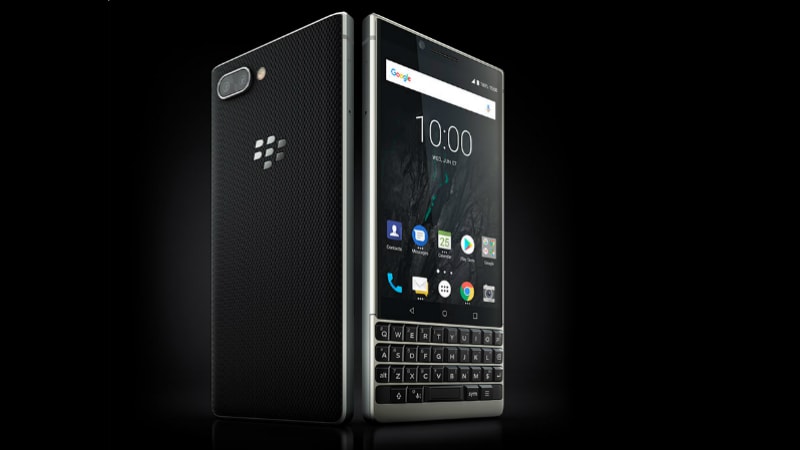 BlackBerry KEY2 is the latest smartphone to come from licensee TCL, and it was launched at an event held in New York on Thursday. The smartphone offers a Series 7 aluminium alloy frame, a textured diamond grip back panel, and a claimed two-day battery life. The first BlackBerry-branded smartphone to sport a dual camera setup takes advantage by incorporating features such as portrait mode and optical zoom. Apart from that, its physical QWERTY keyboard comes with certain intelligent shortcuts helping users launch apps and activate commands with the press of a single key.

As for camera specifications, the BlackBerry KEY2 sports a horizontal dual camera setup with two 12-megapixel rear sensors that include Dual Tone LED flash, HDR, 4K video recording at 30FPS, and dual PDAF. The primary sensor has a FoV (Field of View) of 79.3 degrees, 1.28 micron pixels, and an f/1.8 aperture, while the secondary sensor has a 50-degree FoV, 1.0 micron pixels, and f/2.6 aperture. On the front, the smartphone gets an 8-megapixel fixed focus with screen flash and full-HD video recording.

The smartphone comes in 64GB and 128GB internal storage variants, expandable via microSD card (up to 256GB). Connectivity options on the BlackBerry KEY2 include 4G LTE (on both SIM cards), Wi-Fi 802.11ac (dual-band 2.4GHz, 5GHz), Bluetooth v5.0 LE, GPS, GLONASS, Beidou, NFC, FM radio, a 3.5mm headphone jack, and USB Type-C. A 3500mAh battery powers in the internals from underneath the hood, with Quick Charge 3.0 support. Sensors onboard the handset include accelerometer, ambient light sensor, gyroscope, hall effect sensor, fingerprint sensor (on spacebar key), magnetometer, and proximity sensor. Dimensions of the BlackBerry KEY2 are 151.4x71.8x8.5mm and weight is 168 grams.

DTEK  by  BlackBerry  app  now  includes  the  new  Proactive  Health  check  feature. It also has the enhanced Convenience Key, making it easier to access your most-used apps with custom profiles for at home, in the car, in a meeting or on the go.

"Although there are many different smartphones for consumers to choose from today, most tend to offer very similar experiences without much distinction from one to the next. With the introduction of BlackBerry KEY2, we've created a distinct smartphone that captures all the traits that have made BlackBerry smartphones iconic, while introducing new innovations and experiences that not only make this one of the best devices for security and privacy, but also the most advanced BlackBerry smartphone ever," said Alain Lejeune, Senior Vice President, TCL Communication and President, BlackBerry Mobile.

"BlackBerry phones are the world's most secure Android smartphones. We design them for security from the inside out and we're proud to partner with TCL Communication on the launch of their all-new BlackBerry KEY2. BlackBerry has been iterating and perfecting our approach to mobile security for decades, and we're excited to have this new genuine, modern BlackBerry smartphone available for our fans around the world to enjoy," said Alex Thurber, SVP and GM of Mobility Solutions at BlackBerry.